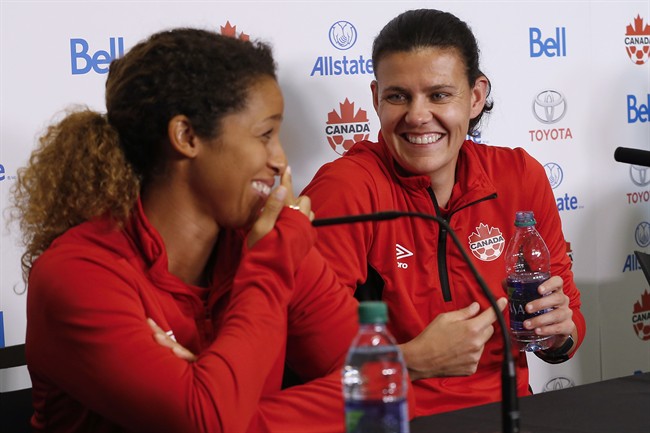 Team Canada soccer players Desiree Scott and Christine Sinclair joke around during a press conference in Winnipeg, Tuesday, June 6, 2017 prior to their match against Costa Rica on Thursday. Sinclair always has the spotlight on her, but the veteran captain says soccer fans should keep an eye on her young, talented teammates. (THE CANADIAN PRESS/John Woods)

WINNIPEG – Christine Sinclair always has the spotlight on her, but the veteran captain says soccer fans should keep an eye on her young, talented teammates.

When Canada’s national women’s squad takes on Costa Rica Thursday in a friendly at Winnipeg’s Investors Group Field, the roster will include a pair of 21-year-old best friends who earn good paycheques playing with high-calibre French clubs.

“Any young player on our team, they’re world-class,” said Sinclair, who turns 34 next week. “Their potential is absolutely limitless.”

That includes speedy forward Deanne Rose, who will hit the field running when the fifth-ranked Canadians try to add to their overall 10-0 record against 30th-ranked Costa Rica.

“Deanne Rose, she’s what (18 years old) and she’s like the fastest person in the world, so maybe keep an eye on her, too,” Sinclair said with a laugh at a press conference this week.

Winnipeg-born teammate Desiree Scott added with a smile: “If you can.”

Sinclair was exaggerating when she described Rose as the fastest in the world, but a team staffer said Rose has been clocked running at a top speed of 30.5 kilometres per hour in team testing.

Rose, who hails from Alliston, Ont., and lists Olympic gold-medal sprinter Usain Bolt as one of her favourite athletes, said she hasn’t run track since Grade 9 as her focus has been soccer.

“It makes me really excited that (Sinclair) would put me within that group of younger players that she thinks are emerging,” Rose said.

“Obviously, it would be the greatest honour to emerge with the Canadian national team. I’m excited for the future because we have so many young players that I think are emerging and then such guidance from the older players.”

“It’s just more trailblazing that this group of women are embracing and it’s great for the game,” Herdman said.

Buchanan, the first Canadian woman to win the Champions League title, said she wondered while growing up if she’d have the opportunity to play pro soccer and is happy that’s now achievable.

“I think there’s a lot of money in soccer now, not only with salary but endorsements and other things, so you can make a decent living,” the defender and Brampton, Ont., native said.

Canada last played in Winnipeg in 2014, a 1-1 draw against the U.S. that included a goal by Buchanan.

The 19-player roster for Thursday’s match includes 16 bronze medallists from last year’s Rio Olympics and three who also claimed bronze in London in 2012 (Sinclair, Scott and Sophie Schmidt.) The squad was the first Canadian team to win back-to-back Summer Olympic medals since 1908.

It’s that growth Sinclair is excited about as she plans to remain with the team she joined at age 16 through its run up to the next World Cup in two years and the 2020 Olympics.

Finishing on top at both those competitions is what she’s aiming to accomplishment.

“When I was a rookie with Canada I was just scared out of my mind,” Sinclair said. “It would have been hard to say when I was 16 years old that I want Canada to be No. 1 because that was not realistic.

“What we’re driving towards now is completely realistic and within our grasp.”

Notes: Soccer Canada announced Wednesday that Jonelle Filigno, Robyn Gayle and Lauren Sesselmann, who helped Canada win a bronze medal at the 2012 London Olympics, are retiring from international competition. The three players, along with the recently retired Kaylyn Kyle and Josee Belanger, will be honoured Sunday when Canada plays its second game against Costa Rica at Toronto’s BMO Field.