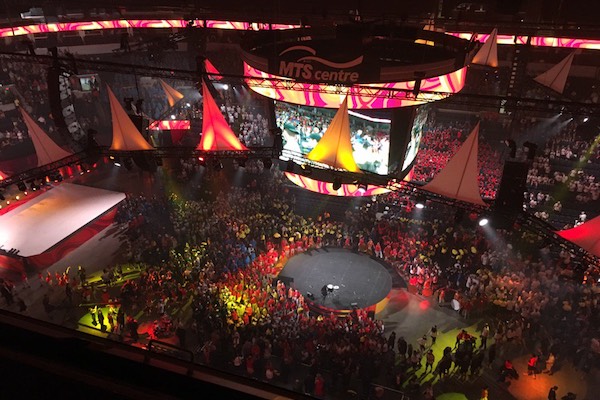 Winnipeg is welcoming the nation over the next 17 days as the 2017 Canada Summer Games kicked off Friday at Bell MTS Place.

About 10,000 people were expected to attend the opening ceremonies, which included a parade of competitors from provinces across the country, plus the sounds of Serena Ryder, Quebec singer Coeur de Pirate, and Winnipeg’s own The Bros. Landreth with two members of the Royal Winnipeg Ballet dancing in front of them.

“From first-rate sport venues and entertainment to accommodations and transportation, our team is focused on delivering an exceptional experience!” said Jeff Hnatiuk, president and CEO of the 2017 Canada Summer Games.

Prime Minister Justin Trudeau was in the city Friday and had a front row seat to the show. Athletes parading past the dignitaries stopped to snap selfies with Trudeau before being ushered along by his handlers to prevent a continued bottleneck.

Saturday marks the first day of competition, with baseball, basketball, soccer and softball first on deck. Sixteen sports are featured, with more than 250 events and a major cultural festival at The Forks. Estimates provided by organizers predict the Games will inject $150 million into the local economy.

Great to have Prime Minister Trudeau joining in the celebration to open [email protected] #JCG2017 pic.twitter.com/Y3QO2Gs28E