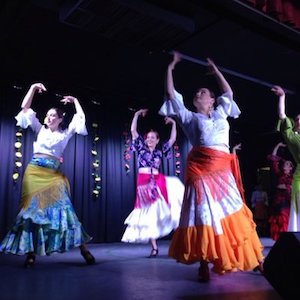 Folklorama’s Spain Pavilion is on now until August 12. (@PAVILIONSPAIN / TWITTER)

WINNIPEG — “Oh my God, this whole place smells like garlic shrimp.” That was the first thing that ran through my head as I walked into Folklorama’s Spain Pavilion. If you know me at all, you know I love seafood. This was the place for me.

The theme of this year’s Spain Pavilion was fiesta, and our tour guide walked us through the posters on the wall and different regions that hold different festivals throughout the year. Other than the posters, there was a few figurines on a table, and that was it. The cultural display left a lot to be desired.

But let’s get back to the real reason I was here: the garlic shrimp. Where is the source of this magic? I found the food line, and it was long, but the closer I got to the food, the more I knew why the line was so long. Although you can buy just shrimp (which I considered), I went for the paella grande — a Spanish stir fry of sorts, made up of rice, chicken, shrimp (!), squid (don’t let that scare you), and various other vegetables. This paella was worth the price of admission alone. Bury me in paella. I could’ve eaten plate after plate. My only word of caution is that you have to peel the legs off the shrimp, so if you’re not okay with playing with your food, maybe stick to something else.

My dining partner and I drank sangria to accompany our meal — a nice mix of red wine, an unidentified sweetener (sometimes it’s Triple Sec, sometimes it’s juice, sometimes it’s literally sweetener), and fruit pieces. It was sweet, without being too sweet, and went well with food.

The mainstage performance was full of the flamencos and tangos that you’d expect, with beautiful, colourful costumes and women armed with castanets and paper fans. The show, with a runtime of about 45 minutes, had a costumed host come out in between each dance and explain what the next dance was called and what cultural significance it holds. The end number is wonderful and energetic, combining the youth group with some of the more experienced dancers, and will leave you shouting olé.

Go if: You like to eat — there’s seafood, chicken, pork and amazing pastries to be had.
Avoid if: You want to spend the whole night at one pavilion – other than the food and the mainstage show, there’s not a lot to see, and you’ll be done in an hour.