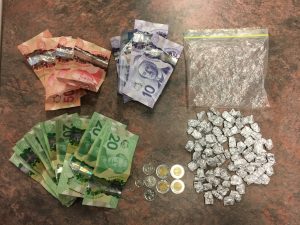 The wild ride is over for a Cross Lake man police say was caught with cocaine, booze, and a large amount of cash while driving erratically on a quad through the northern community Saturday.

Cross Lake RCMP conducted a traffic stop after spotting the quad with two occupants being driven erratically around 5:30 p.m. Police say the driver was not obeying road safety signs and neither occupant was wearing a helmet at the time.

The 33-year-old man operating the quad, a Cross Lake resident, was arrested for impaired operation of a motor vehicle, and during a further search police say they found 42 grams of cocaine, a case of beer, and a sum of cash in the man’s possession.

The accused is facing charges of Impaired Operation of a Motor Vehicle, Possession for the Purpose of Trafficking, Possession of Property Obtained by Crime, and Resisting Arrest.

He was released on a Promise to Appear and will appear in court at a later date.