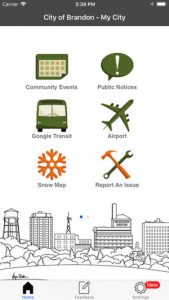 The City of Brandon’s municipal app has been updated to push emergency notifications to iOS users.

The “My City” app will generate an alert if warranted by the Brandon Police Service or city emergency response personnel by instantly alerting a user on their iPhone or iPad.

“If an emergency unfolds, it is critical for the City of Brandon to be able to spread the information as quickly and as widely as possible,” said Todd Burton, the city’s director of information technology.

The alerts will be fed from the opengov.brandon.ca website, allowing community developers and media to relay the same information to their apps and audiences.

Other new features within the app include native support of iPads, an improved display when using the City of Brandon’s interactive snow map, as well as access to Brandon’s online “report an issue” web form.

The app is a free download from the App Store.

← Previous: Put Down Those Razors: Festival du Voyageur's Beard Growing Contest is Back Next: How You Can Help the Christmas Cheer Board This Holiday Season →
Tags: Brandon | Manitoba | Technology