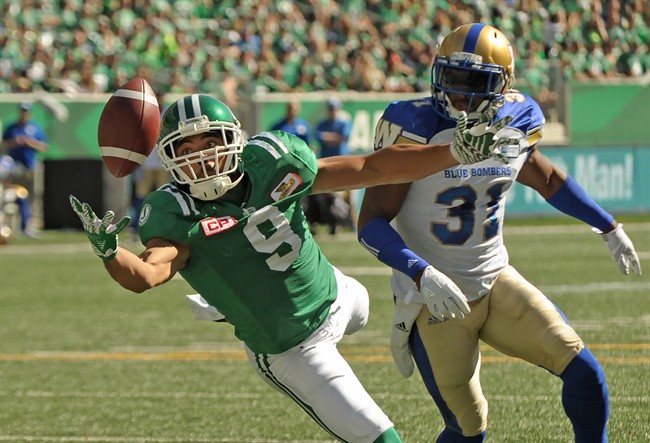 Saskatchewan Roughriders wide receiver Nic Demski, left, stretches out for a pass as Winnipeg Blue Bombers defensive back Maurice Leggett looks on during first half CFL action in Regina on Sunday, September 3, 2017. (THE CANADIAN PRESS/Mark Taylor)

The football club on Tuesday signed the former Manitoba Bison to a one-year deal after he had spent the past three seasons with the Saskatchewan Roughriders.

The Winnipeg native was originally selected in the first round, sixth overall, by Saskatchewan in the 2015 CFL Draft.

Demski played in 40 career games and recording 69 receptions for 725 yards and three touchdowns. He also registered 84 punt returns for 729 yards and one touchdown through his first three CFL seasons.

Before joining the CFL, Demski spent four seasons with the Bisons and was named a CIS All-Canadian and Canada West All-Star in all four seasons.