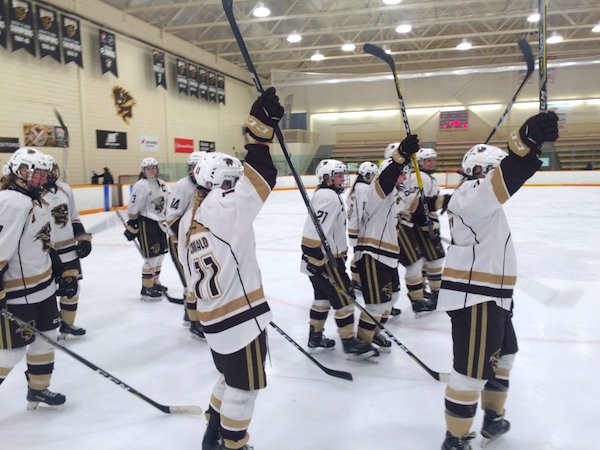 WINNIPEG – The No. 1 University of Manitoba Bisons are going to the Canada West women’s hockey conference finals after Jordyn Zacharias scored in quadruple overtime, ending the semi-final series against the No. 2 University of Alberta Pandas 1-0 on Sunday night (Feb. 25) at Wayne Fleming Arena. This was the second longest game in Canada West history.

Venla Hovi fed Zacharias a slap pass with six-and-a-half minutes left in 4OT, and the puck soared into the back of the net.

“It’s still sinking in a little bit,” said Zacharias after the epic finale. “It doesn’t really hit you at first because it’s overtime, but yeah, it felt really good. I didn’t even care, I just wanted to win –didn’t matter how, who, [or] what.”

At just over 133 minutes of play, both of the very competitive and strong teams were exhausted. Bisons coach Jon Rempel said he believes it was the Herd’s effort in the second period that turned the game in their favour.

“I just saw two incredibly evenly-matched teams that didn’t want to give an inch,” said Rempel. “I just thought we dug in and we just wouldn’t take no for an answer.”

Lauren Taraschuk got the shutout and saved 31 shots, while Kirsten Chamberlin stopped 35 for Alberta.

Much of the fourth overtime period was played in Alberta’s end, but as the game came closer and closer to setting a Canada West record for longest overtime, both teams became more and more exhausted and capitalizing on opportunity became increasingly difficult.

At just one minute left in double overtime, a massive scramble in front of the visitor’s net saw the home crowd erupt in anticipation of a series-winning goal, but the game stayed tied and was pushed to triple overtime.

Earlier in the overtime periods: on the penalty kill in 2OT, Amy Boucher got a breakaway from the red line with no Bisons in sight. She went forehand to backhand, but shot wide. A few chances from both teams in first overtime led to no results.

In regulation, power plays for both teams in the third period turned up short. A Taraschuk accordion save shut out Alberta’s first major scoring attempt of the second period. The Bison’s biggest opportunity of the game closely followed when Alberta’s net was left wide open and Chamberlin without a stick – Courtlyn Oswald almost tapped the puck in.

Taraschuk’s heroic saves in the first period included a sure-fire rebound attempt by the visitors with just five minutes remaining, but an epic last-second slide to the other side of the net flicked the puck aside in the nick of time. Shots at the end of the first were 12-2 for Alberta.

“It was incredible,” said Rempel, in his 14th season at the helm of the Herd. “That’s in my top three that I’ve been a part of at this level for sure, maybe ever.

Manitoba will now host the University of Saskatchewan Huskies the weekend of March 2-4 for the Canada West conference finals and a conference banner. As always, watch the game live online at CanadaWest.tv.

It took 4 OTs, but @umbisons victorious over Alberta Pandas 1-0 with a Jordyn Zacharias goal tonight. Venla Hovi with the asssist. pic.twitter.com/uhixdYUqEF