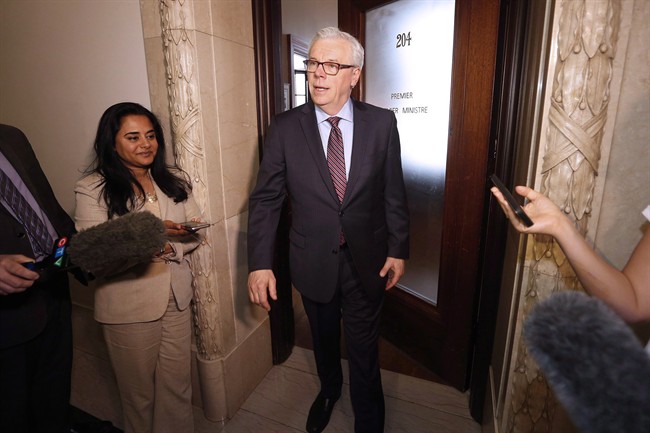 NDP leader and former premier Greg Selinger, alongside his director of communications, Naline Rampersad, speaks with media at the Legislature in Winnipeg, Wednesday, April 20, 2016, the day after his party was defeated by the PC party with a majority. Former Manitoba premier Greg Selinger walked out of the Manitoba legislature for a final time Wednesday after 18 years as a provincial politician. (THE CANADIAN PRESS/John Woods)

WINNIPEG – Former Manitoba premier Greg Selinger welled up in the legislature Wednesday as he said goodbye to his fellow politicians, ending 18 years of sometimes-tumultuous service.

He used his final speech to call for a more inclusive political system.

“Progress has been made, but I know we can make this place better for everyone, particularly (so that) those historically left out can be heard, seen and respected,” he said before pausing to collect himself.

It was a relatively quiet end for Selinger, 67, who has recently been seated in the back row of the Opposition NDP benches.

Selinger was first elected in 1999 and served a decade as finance minister under former premier Gary Doer. He balanced several budgets, championed Francophone language rights and cracked down on payday lenders.

He took over the party leadership in 2009, worked with the private sector to help bring the NHL back to Winnipeg and bolstered the province’s defences during the flood of 2011.

Selinger’s popularity dropped as the economy sputtered. He opted to raise a variety of taxes instead of cutting spending, and started running a long string of deficits. A hike in the provincial sales tax in 2013 led to widespread voter anger.

The following year, five of his top cabinet ministers revolted and called on him to step down to help the party rebound. He refused and held on to the top job by a razor-thin margin at a NDP convention.

Selinger quit as NDP leader after the party lost the 2016 election, but kept his Winnipeg legislature seat until Wednesday. He announced last month — pushed by current NDP Leader Wab Kinew — that he would leave politics, after several women came forward with allegations of sexual misconduct by one of Selinger’s former cabinet ministers.

When asked Wednesday what he would do differently if he could go back to the weeks leading up to the cabinet ministers’ revolt, he hinted he might have warned the rebels more strongly that a public spat would hurt the party.

“We have a primary responsibility to stay focused on serving the people of Manitoba and as long as you keep that focus, you’re going to be OK. If you start getting off that focus, then other things can happen.”

One political analyst said Selinger, who started out as a social worker and served for a time on Winnipeg city council, should be remembered largely for his dedication to social justice and his deep knowledge of issues.

“Not many people in public life in Manitoba could match Greg Selinger in terms of his mastery of different policy files,” said Paul Thomas, professor emeritus of political studies at the University of Manitoba.

But Selinger lacked political instincts and failed to appreciate the turning tide in his support, Thomas said.

“He seemed to have trouble coming to terms with the fact that political careers are time-limited,” Thomas said.

“He probably should have resigned when there was open revolt … in the cabinet and saved his party at that point.”