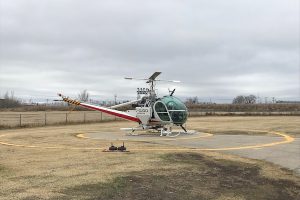 A City of Winnipeg larviciding helicopter prepares to take off from the Grey Street heliport on Friday, April 27, 2018. (CHRISD.CA)

Winnipeg’s insect control helicopters are in the skies as part of the seasonal mosquito larviciding program.

Staff have already begun treating standing water, targeting mosquito larvae in the aquatic stage before they emerge as adults.

The success of the program is very weather dependent and could ramp up efforts if the city receives a significant rainfall.

“Although the spring temperatures have been below normal until mid-April, the return to more seasonable temperatures has triggered the hatch of the spring species of mosquitoes in the water,” said Ken Nawolsky, superintendent of insect control.

City staff are monitoring and treating over 28,000 hectares of water.

Monitoring for adult nuisance mosquitoes in New Jersey light traps begins on April 30, with the first trap counts posted on the city’s website on May 2.

Should the adult nuisance mosquito population spike and fogging is required, the city will use DeltaGard 20EW as its weapon of choice. It will be the first time the City of Winnipeg is using the product after Health Canada gave it the green light last year. Nawolsky says they have a stockpile of about 8,000 litres.

The city is also reducing its mosquito abatement district from 10 kilometres to 8 kilometres from city limits this year, except for East St. Paul, which will have an additional buffer. A reduction in provincial funding for mosquito larviciding in Winnipeg forced the city to scale back, as only one of 10 rural municipalities approached agreed to increase their contribution to the larviciding program.

“The impact of reducing the larviciding area should hopefully not result in a significant increase in adult mosquito populations in Winnipeg. However, it would be dependent on the precipitation not being excessive in the capital region or that there are not consistently high winds to aid the adult mosquitoes in their flight towards the city,” added Nawolsky.