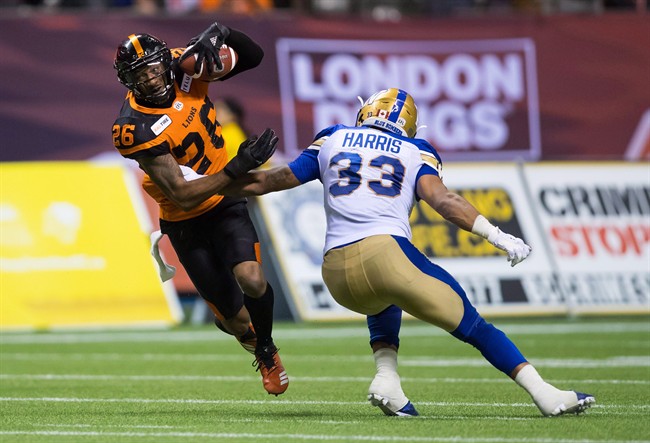 B.C. Lions’ Anthony Orange, left, runs past Winnipeg Blue Bombers’ Andrew Harris after intercepting a Winnipeg pass late during the second half of a CFL football game in Vancouver on July 14, 2018. (THE CANADIAN PRESS/Darryl Dyck)

The Winnipeg Blue Bombers running back is ready to pound out the yards to try for a second straight victory over the Toronto Argonauts Friday night. He’ll then host a wedding social the next night at the stadium for himself and fiancee Carina Fiorentino.

“The biggest thing is getting the win (Friday) and Saturday will just continue the celebrations,” Harris said after the team’s Thursday walkthrough. “It’s just great to have it all in the same place.”

Harris heads into his big weekend on a tear, having rushed for more than 100 yards in three straight games. A fourth would put him in second place on the team’s list behind Willard Reaves’ club-record eight in row in 1984.

“I just want to win the game,” said the 31-year-old Winnipeg native, who leads the league with 610 rushing yards off 95 carries. “That’s the biggest thing.”

His 177-yard output surpassed Toronto’s net offence of 165 yards. He rushed 27 times for a career-high 161 yards with one touchdown. He also caught two passes for 16 yards and one TD.

On the flipside, Argos running back James Wilder Jr. was held to three carries for minus two yards as Winnipeg built up an early lead.

There’s a chance last season’s CFL top rookie might not play. He left Wednesday’s practice with a leg injury and is still being evaluated.

“He felt something (in practice),” Toronto head coach Marc Trestman said after the team arrived in Winnipeg. “But he seems, just talking to him last night, taking to the doctors, we feel reasonably confident that he’ll be playing.”

Running back/kick returner Dexter McCluster also injured a leg in the same practice and was put on the six-game injured list Thursday. Martise Jackson will take his spot.

Trestman said the focus for his team’s offence this week is a better running game and pass protection for quarterback James Franklin, who took over after starter Ricky Ray suffered a serious neck injury on June 23.

“We’ve got to get better play and more efficient play out of our quarterback,” Trestman said. “That would be for anybody who’s playing. It starts there at the quarterback position.

“I think James has shown himself to be very resilient. He’s going through a growing process now in a new system with new verbiage and really his first time playing a lot of football.”

Franklin said it wasn’t disheartening that Harris had more yards than Toronto’s offence.

“It’s frustrating to think, ‘OK, I wish we would have put up more yards,’ ” he said. “I think personally I’m not like, ‘Oh no, it bothers me that he had more rushing yards than we had total yards.’

“But I mean we definitely need to do a better job of that, help our defence out because they made a lot of plays and they put us in really good positions.”

Harris and Fiorentino are getting married next April, and the groom-to-be said the decision to hold their wedding social at Investors Group Field was easy.

“Because this is my home and no one’s ever done it,” he said, adding he’s footing the bill for expenses such as security.

The social, a Manitoba tradition, is a party marking a special event, with people buying tickets to attend and then dancing, drinking, snacking and purchasing tickets for a prize raffle.

Harris said he expects 1,800 to 2,000 friends, family, teammates and some football fans will party on one of the end concourses. Prizes will include a five-night stay at a Mexican villa and Winnipeg Jets tickets.

POINT-GETTERS — Winnipeg leads the league in points scored with 199, an average of 33.3 through six games. Toronto is eighth with 81 points, a 16.2 average through five games.