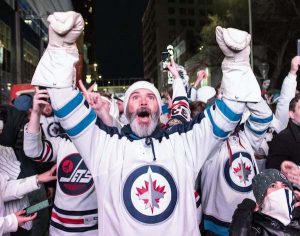 The Winnipeg Jets Hockey Club will host its fifth annual Fan Fest from 8 a.m. to 4 p.m. on Saturday, Sept. 15 at Bell MTS Iceplex, officially launching the 2018-19 season with the chance for fans to get up close and personal with some of the players, win prizes, and have fun.

A variety of family-friendly and interactive activities will engage fans both inside and outside of Bell MTS Iceplex, including the Winnipeg Jets combine, the opportunity to shoot on Mick E. Moose in the Ice Lab (ages 10 and under), bouncers and inflatables from Partyworks, the EA Sports gaming lounge where fans can play NHL 2019, the Canadian Armed Forces display, and more.

The Fan Fest stage will feature select Winnipeg Jets and Manitoba Moose players, coaches and management as they participate in live Q&A sessions hosted by JetsTV host Jamie Thomas. There will also be autograph opportunities with select WHA and NHL alumni.

Fan Fest will include two Winnipeg Jets on-ice sessions as part of training camp at 9 a.m. and noon. As seating is limited, fans are encouraged to begin lining up for the on-ice sessions after 8 a.m. for first come, first served seating. Fans who do not get into the first session will be able to line up for the second session.

Jets Gear will be on site giving fans the first chance to own the alternate home jersey which will be unveiled Friday, Sept. 14, as well as new merchandise for 2018-19, game-worn jerseys and game-used equipment.

Numerous food and beverage vendors will be on site. Admission to Fan Fest is free and free parking is available throughout the day.