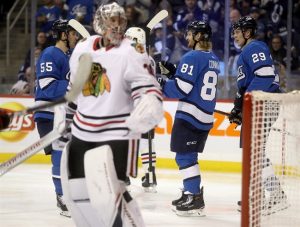 WINNIPEG – Kyle Connor wasn’t too disappointed he missed out on getting his first career hat trick.

The Jets’ third-year forward scored twice as Winnipeg defeated Chicago 6-3 on Tuesday and handed the Blackhawks their eighth straight loss.

Connor’s hat-trick bid was thwarted late in the second period when Chicago netminder Cam Ward made an arcing glove grab. He had other opportunities, too.

“Yeah, that was tough,” Connor said of missing out on a trio of goals. “But played a good game, full team effort from top to bottom.”

Laurent Brossoit, playing his eighth game (seventh start) for the Jets, made 32 saves.

Ward stopped 28 shots for the Blackhawks (9-18-5), who also lost eight straight earlier this season but two were in overtime. The current slump is all in regulation time.

“If I had it (a reason) I would have fixed it already,” said Chicago head coach Jeremy Colliton, who replaced fired Joel Quenneville on Nov. 6.

“Compete harder early on. I thought we were late to almost every situation in the first period and they have a really good team. They pressure hard and they make a lot of plays. They play like men out there and we just couldn’t match it in the beginning and we paid a price for it.”

Winnipeg led 3-0 after the first period and 4-0 with Connor’s second goal at 1:44 of the second period. Chicago came back to make it 4-3 early in the third.

The Jets had mounted their 3-0 lead by 13:38 of the first period, while Chicago didn’t get its first shot on goal until 17:36 into the game, drawing sarcastic cheers from some fans.

It was an unusual start for Brossoit, too.

“I can’t say that I’ve ever been through that much time without a shot,” he said. “It was a bit of a challenge, but they came with a bit of a surge and gave me four or five shots all in a row, so I got into the game off that surge.”

Scheifele opened the scoring with a power-play goal when he redirected a Byfuglien point shot at 7:49 for his 17th goal of the season. Myers scored 72 seconds later.

Connors’ 12th of the season came after he took the puck most of the way down the ice, lost control of it in the slot, got his stick on it again and put a backhand shot past Ward’s glove for the 3-0 lead at 13:38.

After Connor’s second goal was scored on the power play, Strome got the visitors on the board 20 seconds later.

Duncan Keith picked up an assist. He and defenceman Brent Seabrook marked their 1,000th regular-season game together, the most by current NHL teammates and seventh all-time.

Kahun squeezed Winnipeg’s lead to 4-2 after he banged in a rebound at 7:09 and Ward made his sweeping glove save on Connor.

“He was amazing for us,” Kane said of Ward. “He had so many big saves, kept us in the hockey game, gave us a chance to win even when you’re down 4-0. So, yeah, we feel like we left him out to dry obviously, which isn’t fair.”

DeBrincat made it 4-3 at 6:08 of the third, but Perreault scored on the power play at 11:36. Tanev’s empty-netter went in with five seconds remaining.