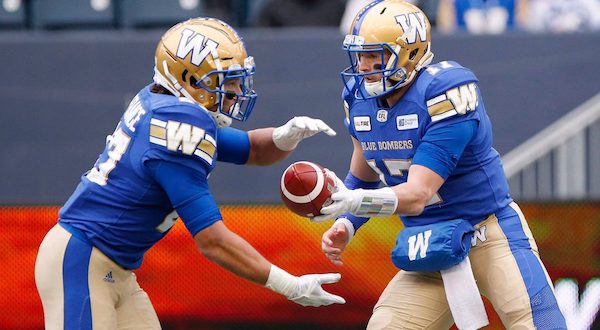 Winnipeg Blue Bombers quarterback Chris Streveler (17) hands off to Kienan LaFrance (27) during the second half of CFL action against the Saskatchewan Roughriders in Winnipeg Saturday, October 13, 2018. (John Woods/CP)

REGINA — Kienan LaFrance is back with the Saskatchewan Roughriders.

The Canadian running back signed a one-year deal with Saskatchewan on Thursday. Lafrance spent the 2017 season with the Riders before joining the Winnipeg Blue Bombers.

LaFrance ran for 137 yards on 36 carries (3.81-yard average) with two TDs last season. The 27-year-old Winnipeg native was selected in the sixth round, No. 45 overall, by the Ottawa Redblacks in the 2015 CFL draft.