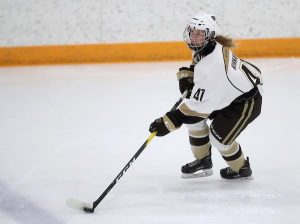 WINNIPEG — If it’s up to the Manitoba Bisons, the women’s hockey team would repeat their Canada West championship win to end the 2018-19 season.

Before that happens, of course, the Herd needs to make their way through the semi-finals.

That’s where Manitoba finds itself this weekend when the No. 10-ranked UBC Thunderbirds visit Wayne Fleming Arena.

“We’ll make a couple of adjustments in preparations to what they (UBC) do,” Bisons interim head coach Sean Fisher told Bisons TV earlier this week.

“They mix it up and they’re pretty dangerous on both sides, so it will be an area that we’ll have to be good at,” Fisher added of the Thunderbirds’ power play and penalty kill tactics.

The No. 3 Bisons are coming off a bye week as they enter the best-of-three series at home. Manitoba (16-5-4-3) finished with a top two seed in the conference, earning a first-round bye into the semi-finals. The Thunderbirds (14-5-4-5), seeded third, earned their way post-season play with a sweep of No. 6 seed Regina in the quarter-finals.

“We’ve been in this position before, but this is a brand team, brand new year… it will be a battle,” said Bisons forward Karissa Kirkup.

Games will be streamed on CanadaWest.TV (pay-per-view) and air on 101.5 UMFM.