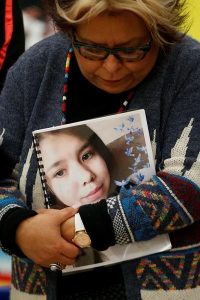 Sagkeeng councillor Marilyn Courchene is shown at Sagkeeng Mino Pimatiziwin Family Treatment Centre on the Sagkeeng First Nation, Man., holding a special report on the death of fifteen-year-old Tina Fontaine Tuesday, March 12, 2019. A Manitoba family says the death of their four-month old daughter while in the custody of foster parents shows a system set up to fail Indigenous families. (THE CANADIAN PRESS/John Woods)

WINNIPEG — A Manitoba mother says the death of her four-month old while in the custody of foster parents shows a system set up to fail Indigenous families.

The First Nations woman says she learned Monday that her daughter recently died but doesn’t know when it happened and hasn’t seen the child’s body.

She and other relatives called for answers at a news conference hosted by the Assembly of Manitoba Chief’s Women’s Council.

The family says they were told the baby died from choking after being fed.

They cannot be named under Manitoba law.

The province says the death is being investigated and did not give details.

“We share in their grief during this tragedy,” Families Minister Heather Stefanson said in an emailed statement Tuesday.

The mother cried as she spoke about how her only child was apprehended soon after she was born in November.

The family did not disclose the reason for the apprehension. The mother said there was a custody arrangement that the baby was to remain in her home community. The mother was also allowed to care for the child for five days last week.

“My daughter is not the only baby that passed away in CFS … and she’s not going to be the last,” said the mother. “How many more kids are going to die?”

“This province does not treat First Nations children as human beings. Instead, they continue to cause more harm by leaving them in dangerous, dangerous situations, and by ripping newborns from their mothers at birth,” she said.

The child-welfare system came under fire in January after a video went viral showing a newborn baby being taken by Winnipeg police and social workers in a hospital as the mother wept.

Statistics from the Manitoba government show newborn apprehensions occur, on average, about once a day. About 90 per cent of kids in care are Indigenous.

Courchene said it’s also devastating the baby died a few days after a report was released into the death of Tina Fontaine, an Indigenous teen who was killed and thrown into the Red River in 2015. The children’s advocate’s report said social workers and others failed the girl.