‘I Fought to Live:’ Manitoba Mountie Shot in Head Faces Shooter in Court 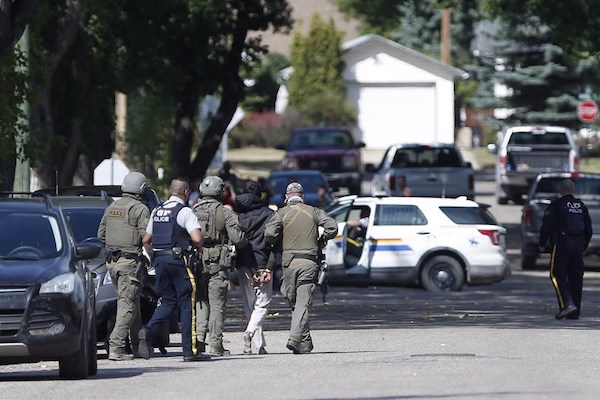 The RCMP emergency response unit arrests an alleged suspect in Neepawa, Man., on Thursday, August 30, 2018, following the shooting of a RCMP officer in Onanole, Man. (THE CANADIAN PRESS/John Woods)

MINNEDOSA, Man. — RCMP Cpl. Graeme Kingdon got a chance Thursday to face the man who shot him during a series of break-and-enters last summer in western Manitoba, and called for the maximum sentence under the law for attempted murder.

“The offender shot me in the back of the head,” Kingdon told the sentencing hearing of Therae Racette-Beaulieu while reading his victim impact statement.

“The only reason my family is not describing my murder right now is that I fought to live, and brave police officers and paramedics saved my life.”

Racette-Beaulieu pleaded guilty earlier this year to charges including attempted murder, theft and break and enter.

He was arrested after a series of homes were robbed in and around Onanole, a small resort community near Riding Mountain National Park, last August.

Kingdon and his partner, Const. Mitch Thompson, had come across a stolen truck. Three people ran from the vehicle, shots rang out and Kingdon was hit in the head.

Thompson told court he was pinned down.

“I can feel the force of the shot that missed me,” Thompson said. “I still deal with the symptoms of post-traumatic stress disorder.”

Kingdon said being shot has changed his life — he has been unable to return to work, go fishing or do many activities with his two daughters.

He said his youngest girl has asked him if she can have a piggy-back ride when his “polka dots” are gone.

“Polka dots are her words for the pellet wounds on the back of my head,” he told court.

Kingdon also said he has a hard time understanding how someone could shoot at people in order to steal household “stuff.”

“I can’t describe how angry I am at the selfishness of the offender.”

The shooting led to a manhunt that ended several hours later in Neepawa, Man. Four suspects were arrested. Three have yet to enter pleas.

Racette-Beaulieu of Sandy Bay First Nation was 18 at the time. He did not speak at Thursday’s hearing.

“A sentence of 16 years is not crushing but it serves the purpose of denouncing his conduct,” Synyshyn said.