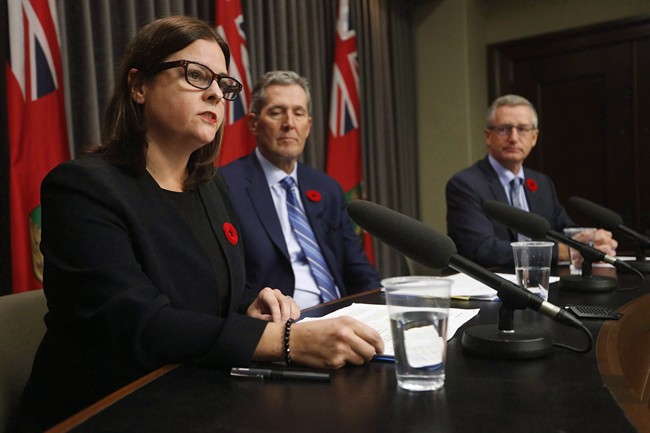 Manitoba Premier Brian Pallister, centre, and Growth, Enterprise and Trade Minister Blaine Pedersen listen in as Justice Minister Heather Stefanson talks about the Manitoba plan for cannabis retail and distribution at the Manitoba Legislature in Winnipeg on November 7, 2017. (THE CANADIAN PRESS/John Woods)

WINNIPEG — Manitoba’s Progressive Conservative government is cutting benefits for some welfare recipients by $25 a month as part of a medium-term overhaul of social assistance.

Starting next month, the province is ending a job-seeking allowance for recipients who are not disabled and who do not have children.

The allowance was set up a decade ago by the former NDP government and Families Minister Heather Stefanson said it has been given out with no strings attached.

“It’s more of a handout than a hand up,” Stefanson said Monday.

“You don’t actually have to be actively seeking employment, so we believe that there’s a better way … to provide incentives for people to move them from dependency to independency in the community.”

Other departments, such as Education and Training, already have specific funding that people can apply for to help cover the cost of job-hunting, she added.

A poverty-rights group said the cut will hurt.

“There are travel costs. There is resume-printing. There is having a hair cut. Those are costs that are borne by people on social assistance when they’re looking for work,” Josh Brandon with the Social Planning Council of Winnipeg said.

“To take that ($25) away is really a step backward for poverty reduction in this province.”

Two years ago the province reduced rental subsidies for low-income earners in both public housing and the private market.

The Tory government announced in its throne speech last November that it would move more employable people from welfare into the workforce. It said the array of current programs is inconsistent and non-standardized.

“We found various programming over the years incentivizes people to stay on (welfare), and we know that people really want to be active and leading independent lives in the community,” Stefanson said Monday.

“This is sort of an ongoing thing to the extent that we can find programs like this that aren’t really achieving the intended results and look towards other ways to make improvements.”