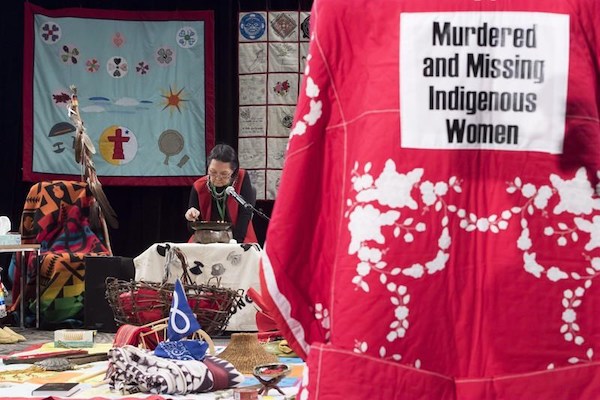 A ceremonial fire is lit at the beginning of the National Inquiry of missing and murdered Indigenous women and girls in Richmond, B.C., Wednesday, April 4, 2018. The national inquiry into missing and murdered Indigenous women is fighting in court for access to two RCMP files the national police force is refusing to hand over. (THE CANADIAN PRESS/Jonathan Hayward)

OTTAWA — The national inquiry into missing and murdered Indigenous women is fighting in court for access to two RCMP files the national police force is refusing to hand over.

The inquiry is set to issue its long-awaited report in June, but says it wants the contested Mountie files to complete its work on one of the saddest chapters in Canada’s recent history.

Both sides agreed to an expedited process and hope to have hearing dates on the dispute before mid-May in the Federal Court of Canada, said Catherine Kloczkowski, a spokeswoman for the inquiry.

“The RCMP should have disclosed these relevant files to the National Inquiry months ago,” she said. “They did not.”

Federal lawyers acting on behalf of the RCMP have yet to make submissions to the court.

A statement from the Mounties said the RCMP makes every effort to co-operate with the inquiry, but this assistance “must not come at the expense of compromising the integrity of ongoing criminal investigations.”

In an April 8 notice of application outlining its case, the inquiry seeks a court order disclosing the two files to commission lawyers.

As part of its mandate, the inquiry established a forensic document-review team to confidentially review police and institutional files, seeking to identify systemic barriers or other weaknesses related to the protection of Indigenous women and girls. The ultimate aim was to make recommendations about the underlying causes of disappearances, deaths and acts of violence.

The inquiry issued two subpoenas last September directing the RCMP to disclose various files, according to the notice of application. In December, the police force produced written rationales claiming public-interest privilege over 59 files because the cases were still under investigation.

Federal lawyers and inquiry counsel then agreed to a procedure, in keeping with the common law, to test the RCMP’s claims of privilege on 12 files most keenly sought by the forensic document-review team.

An RCMP investigator with knowledge of each file was interviewed by an inquiry lawyer in front of one of the inquiry’s four commissioners. After the interviews, lawyers for each side made submissions. The sitting commissioner then ruled on whether public interest privilege had been established.

During the interviews, which took place in January, the inquiry abandoned its challenge on one file and the government dropped its claim of privilege over another. Seven of the remaining 10 files were ordered to be turned over to the inquiry, and one was ruled to be validly withheld, leaving just the two files now at the centre of the court battle.

Federal lawyers objected to their disclosure by filing certificates with the Federal Court under the Canada Evidence Act, which allows for a hearing to decide whether secrecy will prevail.

In its notice, the inquiry says the contested files “are no longer under active investigation” and should be given to the forensic document team.

The RCMP said in its statement to The Canadian Press that the force has reviewed, assessed and disclosed a total of 23 active files to the inquiry. “In two such cases, however, the risk to ongoing investigations and future prosecutions is too high to disclose them.”

Kloczkowski said that upon receiving the two files, the inquiry could, under its terms of reference, use them to make recommendations or refer the contents to authorities for further action.

The commissioners can pass along information to appropriate agencies if it could be used in the investigation or prosecution of Criminal Code offences, or if it points to misconduct. The commissioners have already identified a “number of cases” that appear to warrant alerting authorities, Kloczkowski said.

Although the inquiry can’t disclose details of those cases, the number of referred cases will be made public at the end its mandate, she added.