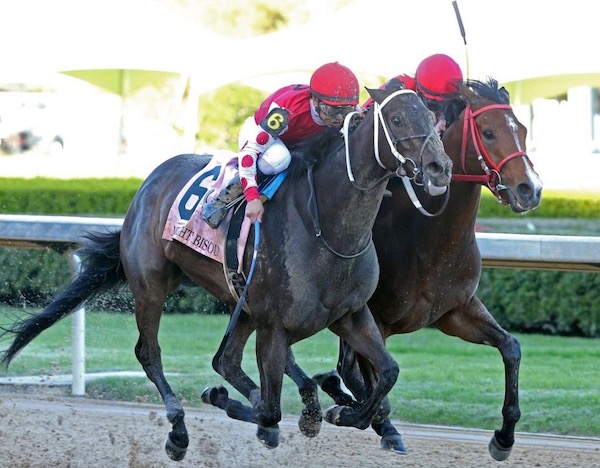 Midnight Bisou (left) and Escape Clause at the wire on Sunday. (ASSINIBOIA DOWNS) 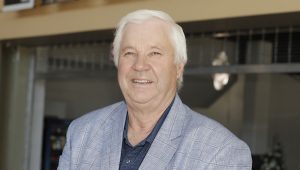 Saturday could very well be the greatest day in the history of Manitoba horse racing.

At about 1:01 p.m., the starter at Belmont Park in Elmont, N.Y., will send out five mares in the 51st running of the Grade 1 $700,000 Ogden Phipps Handicap, on the undercard of Belmont Stakes Saturday.

The race will feature a Manitoba-bred mare — the darling of Assiniboia Downs — Escape Clause. This race, over 1 1/16ths of a mile on dirt, is a Breeder’s Cup Series “Win and You’re In Race” for the 2019 Breeder’s Cup Longines Distaff. If Escape Clause (9-2) can upset the two favourites, Midnight Bisou (1-1) and Come Dancing (6-5), she will automatically qualify for the $2 million (US) Breeder’s Cup Longines Distaff, which will be held Nov. 2, at Santa Anita Park just outside Los Angeles.

Escape Clause was bred by Cam Ziprick and Arnason Farms in Russell, Man., and started her career by demolishing so many fields at Assiniboia Downs that she had to head to the big tracks in the United States just to find competition. She was sold to Barry Arnason, Don Schnell and True North Racing for $3,792 at the 2015 Manitoba Yearling Sale. The daughter of Going Commando, she raced almost exclusively in her native Canada, where she was a 15-time stakes winner in Manitoba and Alberta. Then, last fall she won the Kathryn Crosby at Del Mar and the world opened up to her.

“This is just phenomenal,” said Arnason. “I could never have imagined anything like this. Since I started doing this, my objective was always to get a horse into and maybe win the Manitoba Derby. We were close to winning with Escape Clause two years ago, but I never would have dreamed we’d be racing at this level. Being in Grade 1 competition is like being in the Stanley Cup finals.

“To go from her humble beginnings to race in a Grade 1 Stakes on Belmont Stakes Saturday is beyond our wildest dreams.”

The Ogden Phipps Handicap will be the toughest race Escape Clause has ever entered. She will once again face Midnight Bisou, trained by Hall of Famer Steve Asmussen and the current favourite in the Breeder’s Cup Distaff, Midnight Bisou is the mare who beat Escape Clause by a lip in the 2019 Grade 1 $700,000 Apple Blossom Handicap at Oaklawn in April. Also in the five-mare field is Come Dancing, the winner of the 2019 Grade 2 Ruffian Stakes.

“When we heard that Midnight Bisou was going, we figured that we wanted a rematch,” Schnell said late last week. “We got hit pretty hard in the Apple Blossom, but with a clean trip I think she can win. She’s training better now than she ever has.”

A victory on Saturday would give Schnell, who has been around a long time, his first Grade 1 victory. Escape Clause gave the Manitoba-based trainer his first graded stakes win with a victory at the La Canada at Santa Anita this past winter. Once again, veteran rider Tyler Baze will be in the irons on Saturday.

“It is truly a time for all Manitobans — not just race fans — to feel proud that years of patient breeding in Russell, Man. and four decades of training smarts have produced this moment,” said Assiniboia Downs’ Handicapper Ivan Bigg. “And, not only that, but also to realize that this five-year-old has a great chance of making it to the Winner’s Circle.

“If someone had predicted a few years ago that a Manitoba-bred horse would be racing in a Grade 1 stakes race on the Belmont Stakes card in New York, you’d have been thinking that person was smoking stuff that hadn’t been legalized yet.”

The Ogden Phipps Handicap will go to post at approximately 1 p.m. CDT and you can watch and wager on the race at Assiniboia Downs. If the fans are anything like they were for the Apple Blossom, the Clubhouse at the Downs will be loud.

“Yeah, the thing about Escape Clause is that she has fan clubs everywhere,” Arnason said. “She was called the Darling of Del Mar and the Senorita of Santa Anita and at Oaklawn they called her the Assiniboia Assassin. I was at the Apple Blossom at Oaklawn and people were in love with her. It’s a Cinderella story. It’s David taking on Goliath. Everybody is cheering for her. She got a standing ovation at Del Mar (San Diego). That’s unheard of. People love the fact that a horse of such humble beginnings comes and rattles the cages of the big guys. It’s unbelievable, the support she’s getting.

“And now we have a chance to beat Midnight Bisou, the best older mare in the world. But Escape Clause has never been better. There isn’t a pimple on her. She’s sound. She’s extremely healthy, the fittest horse in the barn at Canterbury this spring. And she’s getting better the older she gets. If she stays on course, she could still be better.”

Just as an aside, at 5:37 p.m. CDT this Saturday, June 8, it will be the 151st running of the Belmont Stakes, the final jewel of racing’s Triple Crown. No, there will not be a Triple Crown winner, but if I were a betting man — and I am — my money stays on the 9-5 favourite Tacitus.

Remember, you can watch and wager on the entire Belmont card on Saturday. That includes, nine stakes races starting with first post at 10:30 a.m. It will be Crazy Hour in the Clubhouse if Escape Clause wins: beer, wine, shots $2.95 and half-price appetizers.

It would indeed be the most momentous Crazy Hour ever.