Winnipeg to Host NFL Pre-Season Game Between Raiders and Packers 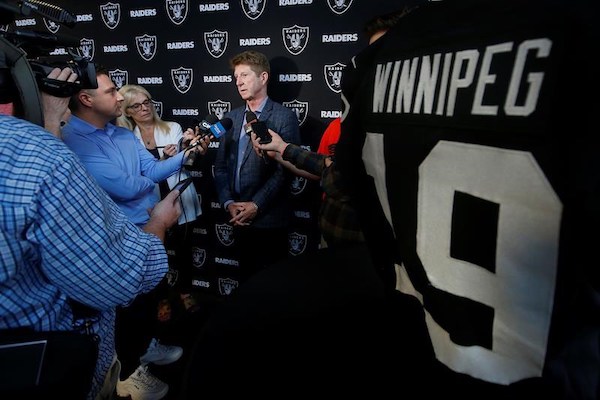 John Graham, President of On Ice Management speaks to the media on Wednesday, June 5, 2019, at a press conference in Winnipeg to announce that the Oakland Raiders will be hosting the Green Bay Packers in their week three pre-season game Thursday, August 22 at the home of the Winnipeg Blue Bombers. (THE CANADIAN PRESS/John Woods)

WINNIPEG — The NFL is coming to Winnipeg.

A pre-season game between the Oakland Raiders and Green Bay Packers will be played at IG Field — home of the CFL’s Winnipeg Blue Bombers — in the third week of the exhibition schedule on Aug. 22. Tickets for the exhibition game will range from $75 to $340, plus taxes and fees.

The Blue Bombers and On Ice Entertainment Ltd. held a news conference Wednesday to confirm the game.

It is a Raiders home game.

The city of Regina was in discussion with a promoter earlier this year about potentially staging the game, but the plan fell through.

The Raiders are scheduled to move their team to Las Vegas next year.

The game in Winnipeg will mark the first NFL contest in Canada since the Buffalo Bills completed a run of eight games in Toronto with a regular-season clash against the Atlanta Falcons in December 2013.

The Raiders have Canadian content on and off the field.

The club’s roster features Canadian tight end Luke Willson, a native of LaSalle, Ont., entering his seventh NFL season. The six-foot-five, 251-pound Willson spent last season with the Detroit Lions after starting his career with the Seattle Seahawks in 2013.

Willson, 29, appeared on two Super Bowls with the Seahawks, winning , winning a Super Bowl with the club as a rookie. he had two catches for 17 yards in Seattle’s 43–8 victory over the Denver Broncos.

Safety Erik Harris, who spent three seasons with the CFL’s Hamilton Tiger-Cats (2013-15) is entering his fourth NFL campaign and third with the Raiders. He signed a two-year contract extension with Oakland in March.

And Raiders GM Mike Mayock was a defensive back with the CFL’s Toronto Argonauts (1981) before finishing his playing career with the New York Giants (1982-83). He later worked as an analyst and sideline reporter on ESPN’s CFL coverage.