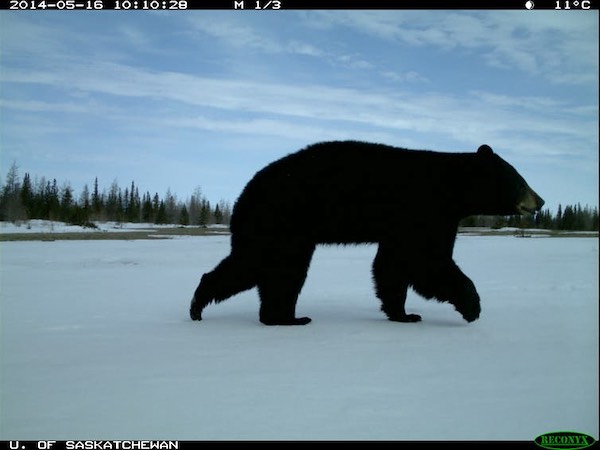 A black bear wanders in Wapusk National Park in May 2014. (DOUGLAS CLARK / UNIVERSITY OF SASKATCHEWAN / FILE)

KENORA, Ont. — A Winnipeg man says he is lucky to be alive after suffering severe bites from a bear that attacked him three times near his cottage in northwestern Ontario.

Dave Schwab, who is 69, says he was finishing his walk near Kenora last Thursday when he spotted a black bear about 100 metres ahead of him in some bushes.

Schwab, an experienced hiker, says he made noise and the bear seemed to walk away, but it didn’t leave the area and started following him before it attacked and bit his thigh and arm.

A kick to the bruin’s belly scared the animal away but it came at him twice more, only this time Schwab fended it off by clubbing it on the snout with a birch log and his foot.

Some contractors working on his cabin heard his calls for help and drove him to Kenora for treatment that included stitches to close some of his wounds.

Ontario Provincial Police say the bear believed responsible for the attack was found and put down.

Schwab said adrenaline is what kept him going during the attack.

“It’s a reminder to me of how thankful I am for life and how grateful I am to be alive.”

Schwab said he will continue to walk and hike near his cottage, but from now on he will carry bear spray.