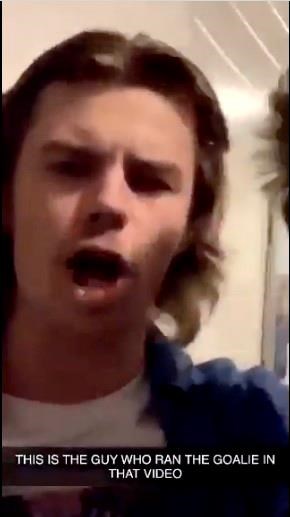 Yorkton Terriers’ hockey player Greg Mulhall is shown in a screengrab from a video posted to social media. (THE CANADIAN PRESS/HO)

YORKTON, Sask. — A Saskatchewan Junior Hockey League player who was serving a suspension for rough play on a goaltender won’t be playing for the rest of the season after appearing in a profanity-laced video.

The Yorkton Terriers released forward Greg Mulhall on Sunday and the league banned him for the remainder of the 2019-20 season.

“I think if you viewed the video, I think it’s pretty self-explanatory,” SJHL president Bill Chow said Monday of the decision to cut ties with Mulhall.

Mulhall was suspended for 25 games for a head shot on Melville Millionaires netminder Berk Berkeliev in a game on Sept. 14.

Berkeliev was hospitalized after suffering a concussion and losing several teeth when the two players collided while he was out of the crease.

In a video posted on social media, Mulhall swears repeatedly as he boasts about the hit and shows no remorse.

Chow said he became aware of the video on Sunday, called the Yorkton Terriers and together they made the decision to drop Mulhall, who is from Fort Saskatchewan, Alta.

The league says in a statement that the video was disrespectful.

The SJHL did not say if Mulhall will be eligible to return next season. Chow said “that’s a decision that we’ll decide at that time.”

Berkeliev, who is from Calgary, left his crease to play the puck near the blue line when Mulhall ran into the unsuspecting goaltender, whose helmet went flying as he fell backwards onto the ice.

He appeared to lie motionless as a melee between players ensued that resulted in 88 minutes in penalties between the two clubs.

Mulhall was assessed a match penalty for attempt to injure or deliberate injury.

Berkeliev, who spent one night in hospital, needed eight to 10 stitches on his face and upper lip and five on the back of his head.

In a message to The Canadian Press on Monday, Berkeliev said he’s focused on recovering from his head injury and hopes to return to the ice.

“I think what happened on the ice and how (Mulhall) responded is between him, the hockey gods and the league regulations, and I trust that the SJHL committee has the capacity to manage that situation in the best way possible,” he wrote.

The game ended with a total of 43 infractions for 228 penalty minutes. The teams combined for 17 10-minute misconducts as well.

Chow said at the time of the suspension that it was based on the severity of the hit and the vulnerability of Berkeliev when he was hit. Chow also said it took into account that player safety is “first and foremost.”

“We have to be here to support him. He is a 19-year-old kid who I think deeply regrets the situation.”

Yorkton and Melville, just over 40 kilometres apart, have had a long history in the SJHL, but Chow has said teams need to set aside rivalries and just play hockey.

The two teams next meet on Saturday. (CKOM, CTV, CJME)