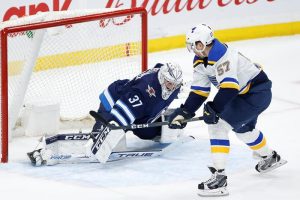 David Perron scored 3:14 into overtime and Bozak had two goals as the Blues got by the Winnipeg Jets 5-4 on Friday.

“We have to get better, but it does give us that confidence to keep playing well,” Bozak said of the league-high seven straight wins, which includes six in regulation time.

“A lot of games have been tight games, so finding ways to win those is also huge.”

Perron took advantage of a giveaway by Winnipeg forward Mark Scheifele and went in alone to beat Jets goalie Connor Hellebuyck with a deke and backhand shot for his 16th goal of the season. He also had an assist.

“There’s many things that come to my head there,” Perron said of his breakaway plans. “Maybe a shot five-hole, maybe just a regular shot a little bit further out, and then I tend to go on the backhand a little bit and try and freeze him and go in the back and it worked out.”

Jordan Binnington stopped 25 shots for St. Louis, which hosts the Jets on Sunday.

Kyle Connor scored twice and Gabriel Bourque and Blake Wheeler each had a goal for the Jets (21-14-3). Patrik Laine collected a pair of assists.

Hellebuyck made 30 saves for Winnipeg, which has lost four of its past five games (1-3-1).

“We were never out of it. We kept fighting back. It was a good battle,” Connor said. “It kind of sucks we’re on the wrong end of it finishing off, but I think we can learn some stuff from that going into the next game.”

With Hellebuyck pulled for an extra attacker, Wheeler tied the game 4-4 with 1:14 remaining in the third period after Nikolaj Ehlers sent a pass from behind the net out front to the captain.

“Just one of those games,” Wheeler said. “Good job by everyone staying in it. I thought we had a lot of real good players tonight. Came up short.”

The game was tied 1-1 after the first period and the Blues led 3-2 after two.

Faulk scored on his team’s first shot of the game, sending a point shot straight at Hellebuyck at 1:10.

Bourque tied it up with 46 seconds remaining in the first off a long rebound he fired in from the middle of the left circle.

Winnipeg outshot the Blues 12-5 in the opening period.

Pietrangelo broke the tie at 5:30 of the middle frame, but Connor made it 2-2 at 9:37 when he popped the puck over Binnington’s left shoulder from close in.

Bozak regained the St. Louis lead with a power-play goal at 16:08.

Connor made it 3-3 on the power play at 3:12 of the third when he tapped in a loose puck in the crease after Scheifele hit the post. He and Scheifele share the team lead in goals with 17 each.

Bozak fired his second goal of the game in a top corner past Hellebuyck at 5:10.

Pietrangelo picked up an assist, giving the defenceman 10 points (four goals, six assists) in his past nine games.

Scheifele has notched 16 points in his past 11 games, including eight goals.

“We’ve got to be better defensively,” Blue coach Craig Berube said. “I thought that some of the (Winnipeg) goals were just breakdowns that we normally don’t do, and we can be better. Again, they’re a good team and we’re going to be challenged on Sunday.”

Schwartz and Perron, who also had an assist, extended their point streaks to five games each. Schwartz has two goals and seven assists in that span, while Perron has four goals and five assists.