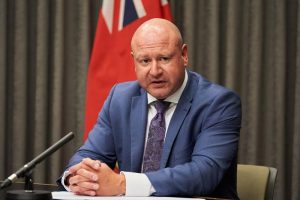 WINNIPEG — The Manitoba government is ordering Winnipeg-area bars and other licensed establishments to close earlier in a bid to slow the spread of COVID-19.

Starting Wednesday, licensed restaurants, bars and pubs in the region will have to stop serving alcohol at 10 p.m. and close at 11 p.m., except for food delivery and takeout.

The province’s chief public health officer says many cases in recent weeks have been linked to late-night socializing.

“Our cases and contacts have occurred later on in the evening,” Dr. Brent Roussin said Monday.

“And I think later on … there’s more alcohol being consumed, less attention to safeguards.”

Dancing and dartboards will be off-limits as well to discourage people from congregating. Staff will have to write down contact information for at least one person from each table to help contact tracing. And tables will be limited to 10 people

Roussin warned that noise limits also are coming for bars and restaurants in the Winnipeg region. Some sort of decibel limit will be set in the coming days so that people can talk without getting too close.

The Manitoba Restaurant and Foodservices Association said revenues for its members have already plummeted due to earlier restrictions and it does not support the new ones.

“We made it clear from the start that we were not in favour of any additional financial restrictions, and that we would be coming to the government to look for subsidies to continue to be able to assist financially those restaurants that are taking an additional hit,” executive director Shaun Jeffrey said.

Health officials reported 51 new COVID-19 cases Monday, 35 of which were in Winnipeg. The capital city has seen a spike in recent weeks and had already been under more restrictions than other areas.

The latest COVID-19 death, reported on the weekend, was of a man in his 50s with several underlying conditions at a care home, Roussin said.

Health officials were also keeping an eye on an outbreak among members of the Little Grand Rapids First Nation, a community of roughly 1,500 that lies 250 kilometres northeast of Winnipeg.

Nineteen people in Little Grand Rapids have tested positive following events at the community centre more than a week ago. Community leaders have told residents to stay home except when seeking medical care, going for testing or shopping for essential items.