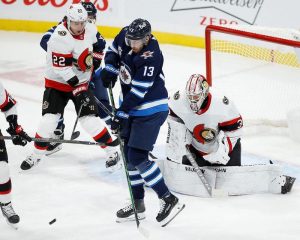 WINNIPEG — Connor Hellebuyck led the Winnipeg Jets to yet another win this season over the Ottawa Senators.

Hellebuyck stopped 41 shots — 18 in a scoreless first period — to anchor Winnipeg’s 5-1 victory over Ottawa on Thursday night. The Jets (8-4-1) improved to 4-0 against the Senators (2-12-1) with the two teams set to square off again Saturday.

“I got into a rhythm, I got into it early,” Hellebuyck said. “The guys were keeping them to the outside allowing me to see a lot of the shots, which is great for my position.

“They got a lot of shots but I thought we controlled where they were coming from and we handled the rebounds . . . so yeah they got a big number there but I felt like our team kind of controlled it well.”

“I thought we got the puck deep and we killed their momentum,” Hellebuyck said. “We killed where they wanted to go with the puck and then we created some battles which we came out on top of.

“It was getting the puck to stop moving then jump on them.”

Mathieu Perreault and Neal Pionk both scored in the third for Winnipeg.

Ottawa was minus defenceman Artem Zub, who was out for “precautionary reasons” after an inconclusive COVID-19 test. The Senators said prior to the contest Zub’s inconclusive test result came back Thursday after testing negative Wednesday.

Following the game Senators head coach D.J. Smith confirmed that Zub’s test Thursday was negative and that he will be able to return to the team Friday.

The NHL has postponed 35 games this season, but the seven Canadian teams in the North Division have yet to see their schedule interrupted.

Ottawa controlled a scoreless first, outshooting Winnipeg 18-6. The Jets went ahead 1-0 just eight seconds into the second when Stastny registered his third of the season.

Ehlers gave Winnipeg a 2-0 advantage with his ninth of the year. He deflected a Dylan DeMelo blast from the point past Ottawa goalie Matt Murray at 7:53.

DeMelo was originally credited with the goal before an official scoring change. DeMelo, a former Senator, said there was a simple explanation for Winnipeg’s improved play in the second.

“We moved our feet, plain and simple, more of a north game instead of east-west,” he said. “Just being direct and keeping it simple.

“That’s how we have to play and when we get away from that it’s very evident what happens. We’ve got a lot of speed and a lot of guys who can make good plays but it starts with moving your feet and when you move your feet things start to open up.”

DeMelo also had praise for his former team.

“I think they’re definitely going the right way,” he said. “It will probably take some time with their young guys, obviously that learning curve.

“But if they play like that every night I’m sure they can live with the mistakes . . . they gave us a tough game, they’re no pushover. Their record maybe doesn’t speak for how they play and how hard they play. We’re in for a tough one again Saturday.”

Wheeler made it 3-0 with an unassisted power-play goal at 19:34, his fourth of the season. But as the period ended Murray appeared to be shaken up and wasn’t on the bench to start the third as backup Marcus Hogberg went in goal.

“It was more precautionary,” Smith said. “They’re doing some tests and we’ll see (Friday morning) how he is.

“We’re hopeful (Murray) will be good but if not, we’ll have to look at the options.”

Perreault beat Hogberg at 2:58 to put Winnipeg ahead 4-0 with his second of the year. Norris scored Ottawa’s goal at 11:42, his third, before Pionk countered with his first of the season at 13:45.