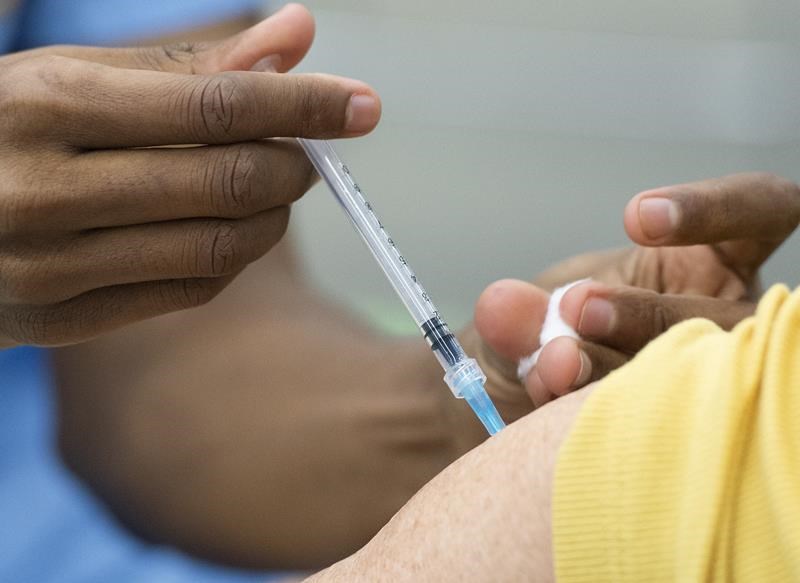 A senior receives their COVID-19 vaccination at the Palais de Congress site as Quebec begins mass vaccinations based on age across the province, Monday, March 1, 2021 in Montreal. (THE CANADIAN PRESS/Ryan Remiorz)

WINNIPEG — Members of the military are landing in Manitoba this week to help with COVID-19 vaccinations in 23 northern First Nations, while the province says it’s ready to deliver 20,000 doses a day when there’s enough supply.

Federal Indigenous Services Minister Marc Miller said members of the Canadian Armed Forces are to arrive in Thompson on Thursday. They will help set up vaccination sites, administer doses and provide transport to community members.

Miller said the operation was developed with First Nations leadership and health professionals.

“Together we will make sure that residents’ needs are met and that everyone can be safe and healthy,” Miller told a news conference in Ottawa on Wednesday.

Up to 200 military personnel will take part in the operation, which is expected to last until the end of June. Aircraft and logistical vehicles will also be deployed.

Miller said the effort will accelerate the pace of immunizations so that 100,000 First Nations people can get doses in 100 days.

The Armed Forces have deployed members in more than 50 Indigenous and northern communities over the past year.

First Nations in Manitoba were significantly impacted by the second wave of COVID-19 and health officials have said there is still concerning spread in the province’s north.

Data have shown First Nations have more severe outcomes from COVID-19 at younger ages, including hospitalization and death, compared to other Manitobans.

Health officials are strongly recommending that people get a COVID-19 test before they travel to First Nations communities.

Eighty new cases of COVID-19 were announced in the province on Wednesday. Thirty-seven are in the northern health region.

The eligibility for getting a vaccine in Manitoba was also expanded to people 65 and older and First Nations people 45 and older.

Dr. Joss Reimer, the medical lead for Manitoba’s vaccine task force, said early analysis of vaccinations among First Nations shows the need to ensure that the population gets a second dose quickly.

Due to poverty, crowded housing and other effects of colonization, she said it’s possible that just one dose is not sufficient “because there’s so much more exposure to the virus in those congested settings.”

“That first dose may not be as protective as we hoped,” she said.

Reimer said more than 146,000 doses have been administered to eligible residents. That means about nine per cent of people 18 and older have received at least one dose.

The province has capacity to deliver 20,000 doses each day through supersites, pop-up centres and targeted vaccination efforts.

Johanu Botha, a co-lead with the task force, said access to vaccines remains an issue and he can’t say when the province will hit that benchmark.

“We still don’t have enough vaccine to truly operate at that level.”