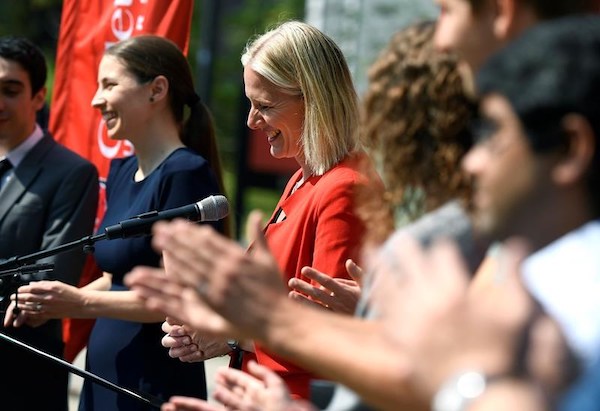 Minister of Environment and Climate Change Catherine McKenna is surrounded by Carleton University faculty and students during a funding announcement for two energy-efficient building research projects at the university, in Ottawa on Friday, July 26, 2019. (THE CANADIAN PRESS/Justin Tang)

The five-year plan aims to save energy and cut pollution while creating jobs, with potential projects ranging from environmentally friendly community centres to energy-efficient library windows.

“We need to be tackling climate change and buildings are 20 per cent of our emissions,” McKenna said in an interview Wednesday.

Community centres, sports facilities and cultural spaces account for 28 per cent of greenhouse gas emissions in municipally owned facilities, according to the Federation of Canadian Municipalities.

McKenna said the program, which she hopes will dovetail with $2.75 billion in short-term transit spending announced last month, will invest in projects that meet a minimum threshold for energy efficiency and boost inclusion, particularly in high-needs communities.

The Conservatives criticized the government last month over the Canada Infrastructure Bank not having completed a single project. The Crown corporation was launched in June 2017.

“When you’re fundamentally changing a relationship, it does take a bit of time,” Vancouver Mayor Kennedy Stewart said at a news conference with McKenna on Wednesday.

But he said new federal programs that municipalities can tap directly for green-tinged funding have “absolutely streamlined the delivery times.”

He cited the government’s $1 billion rapid-housing initiative, which has allowed B.C. to buy several hotel properties in a move to help house homeless people in Vancouver.

Thomas Mueller, head of the Canada Green Building Council, said green builds have the power to improve occupants’ health and quality of life.

The Liberal government is also investing in clean technology and gunning for a robust green-economy transition that includes cleaning up abandoned oil and gas wells, McKenna said.

“The oil and gas sector has huge innovation going on, and there’s huge opportunities like carbon capture and storage.”

McKenna said energy workers in Western Canada have a right to be worried about their livelihoods amid a struggling fossil-fuel industry.

“Of course they should,” she said. “We’ve got to make sure that we’re supporting everybody.”