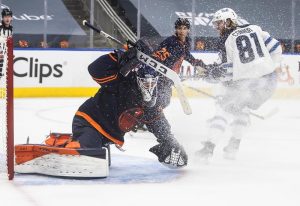 EDMONTON — The Winnipeg Jets contained the NHL’s top two scorers and their goaltender Connor Hellebuyck did the rest in a 4-1 win Wednesday over the Edmonton Oilers to open their first-round playoff series.

Hellebuyck was stellar with 32 saves. Oilers stars Connor McDavid and Leon Draisaitl were held off the scoresheet with a combined six shots on goal.

Dominic Toninato scored the third-period game-winner for Winnipeg in its first playoff meeting with Edmonton since 1990 in their Smythe Division days.

Tucker Poolman also scored and both Kyle Connor and Blake Wheeler added empty-netters for the Jets.

Hellebuyck stared down a barrage of shots in the final minutes as the hosts pressed for a goal.

Last season’s Vézina Trophy winner, who turned 28 on Wednesday, posted a 2-5 record versus the Jets in the regular season.

“Today has been an exciting day for me,” Hellebuyck said. “Everyone around the rink has been making me feel real happy about my birthday. This is the perfect way to celebrate it.

“And I just thought it was a good team game tonight. Our details were right and I thought our offensive game came when it needed to.”

No fans were allowed in Rogers Place, but Alberta Health provided an exemption for a dozen front-line health workers to attend Wednesday’s game.

Game 2 is Friday in Edmonton before Games 3 and 4 on Sunday and Monday respectively in Winnipeg.

The 24-year-old Oilers captain finished with 33 goals and 72 assists in 56 games played, which was 21 points more than teammate and runner-up Draisaitl.

Edmonton boasts the top power-play in the NHL, but didn’t convert its one chance with a man-advantage Wednesday.

“I think we can do a better job being hard on him, getting bodies there,” McDavid said. “We had that in spurts. Other times he was able to catch it and the play was done.

“As forwards, we’ve got to do a better job of getting there and bringing traffic to him.”

“I actually didn’t mind our game. I thought we did a lot of good things. I thought we had the puck a lot of the night, played in their zone. Put a lot of pucks there. Just didn’t find a way to get one.”

Led by McDavid’s seven goals and 15 assists, the Oilers won the season series 7-2.

But the Jets brought a hard game to the opener taking away time and space from Edmonton’s attack and tying up Oiler bodies and sticks. Winnipeg tallied 68 hits to Edmonton’s 50.

The Oilers outshot the visitors 22-14 over two periods, but the game was tied 1-1 heading into the third.

“It’s playoff hockey. It’s going to be tight. Space is at a premium out there,” Oilers head coach Dave Tippet said.

“We like what we’ve done all year. We’ve got a confident group. We’ll re-rack and get ready for Game 2.”

Hellebuyck’s glove save on Ryan Nugent-Hopkins to start the second period and stopping an Alex Chiasson’s tip during Edmonton’s power-play later in the period were difference-makers.

“Our confidence is directly tied to him,” Wheeler said. “The way he carries himself gives us confidence every single night and we know that goaltending means a lot this time of year.”

Play continued for a few seconds before the goal horn sounded on Toninato’s game-winner at 10:46 of the third period.

He’d tipped a Logan Stanley blast from the blue-line, but the puck flew out so quickly it wasn’t immediately signalled a goal.

“I thought it was initially in,” Toninato said. “I actually rose my stick right away but then the play kept going.

“I was like, ‘Oh no, now I’m going to look kind of dumb.’ And then, luckily I got back to the bench and the guys said it was in so it was a good feeling.”

The 27-year-old had COVID-19 in November and spent much of the season on Winnipeg’s taxi squad before making his Jets debut in the second-last game of the regular season.

Poolman drew Winnipeg even to 1-1 at 11:01 of the second period when Smith didn’t secure the rebound on a Wheeler shot. Poolman swept the puck underneath the Edmonton goaltender.

Puljujarvi scored the first goal of the series at 8:24 in the second. Teammate Tyson Barrie’s shot from the blue-line bounced off Jets defenceman Dylan DeMelo for Puljujarvi to corral and thread under Hellebuyck’s arm.

Winnipeg out-hit Edmonton 31-19 in a goal-free first period. Edmonton’s Josh Archibald delivered the biggest check of the period, however, crunching DeMelo into the boards.