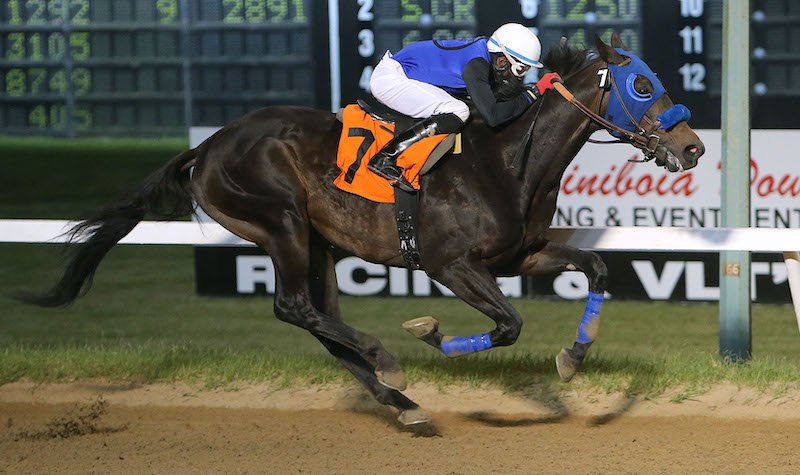 Kirt Contois, the assistant racing secretary at Assiniboia Downs, has noticed his office phone getting busier these days. Lots of calls are coming in from owners and trainers in the United States.

“There is definitely more interest in the Manitoba Derby this year than there has been in a long time,” said Contois with a smile. “Now that it’s a $100,000 race, the guys down south are starting to take notice again. There will be a lot of interest in the Derby Trial on July 12. They’re going to watch that race closely to see what we have here locally. After that race, I think you might see a few more American entries than we’ve had in the past few years. No guarantees, of course, but that’s the way it’s starting to feel.”

On Friday morning, the deadline for entries into the 2021 Derby Trial closed. Because it was free to nominate, 17 horses were nominated for next Monday night’s $35,000 Trial, although Contois suspects seven, maybe eight horses will actually enter the starting gate. With the Manitoba Derby (Monday, Aug. 2) less than a month away, the Trial will be a solid prep race for a handful of the top local three-year-olds.

It will also be a look-see race for a number of other owners and trainers, especially those outside of Manitoba. Will the filly Melisandre decide to race in the Manitoba Oaks or hold out like her older sister Escape Clause and run the Derby? Will Robertino Diodoro, a three-time champion, be back? Who will invade from Canterbury or Woodbine?

These questions will be answered after the Derby Trial because the big news is that this year’s Derby has made its return into the national racing conscientiousness by raising its purse to $100,000.

“Horsemen were patient and supportive through a challenging season last year, forcing them to sacrifice a number of racing opportunities,” Downs CEO Darren Dunn said. “We’re now in a position to return that support.”

There have already been two open stakes races for three-year-olds. Morning-line Derby Trial favourite City Champ won both of them: The $20,000 Proven Reserve Overnight Stakes and the $35,000 Golden Boy Stakes. This Wednesday night, the third three-year-old battle is the $35,000 Frank Arnason Memorial Sire Stakes. The winner of that race will not challenge in the Derby Trial, less than one week later, but will likely test the field in the Derby.

Meanwhile, the gifted filly, Melisandre sits in the weeds and collects first-place cheques while dominating the female three-year-old class. She’ll race again this Monday night in the $35,000 Hazel Wright Sire Stakes and is already a 1-5 favourite.

After that, Melisandre’s owners’ Barry Arnason and True North Thoroughbreds, will watch the Derby Trial closely. They’ll know after next Monday night’s race if they feel their filly is ready to challenge the boys for a first-place purse that is almost equal to winning three $35,000 stakes races.

“It’s not out of the question that Melisandre runs in the Derby, but she has an easier spot in the Oaks,” said Contois. “But they’ve done it before with Escape Clause it wouldn’t be a surprise if they did run her in the Derby. A $60,000 first prize is a lot of money and thoroughbred owners do like money.”

“There are 10 local hopefuls in the Derby Trial,” explained Contois. “Of the entire nomination list of 17, 12 have run here, but two came from Alberta. Remember, these horses are nominated but nominations are free so trainers see the race and say, ‘OK, I’ll enter and then just don’t show on race day.’ There are four more from Alberta, but in total, we’ll probably only see two of them.

“Projected for the Trial is City Champ and Cozy Bear. Etu Babou is a possibility and Major Shepard now looks probable for the race. Flash of Glory will be a go, Midnight Salute will go for sure, Shotthrutheheart and Stone Café will go, Witt’s Taquito, I think is on the path to being here and Jumeirah Coast is a horse that we believe (trainer) Craig Smith is going to bring.

“There is no shot for Tee Class. Two Terms is entered this Tuesday night so I doubt he’ll race again Monday, Warriors Hero is a question mark. Everyone is taking a real, hard look now and looking at what’s there, trainer Wendy Anderson’s City Champ is the one to beat. He has experience going around two turns and is going for five wins in a row.”

The California-bred City Champ, owned by Bill Meikle and Wind Dancer, came from San Francisco’s Golden Gate Fields in May. He had won a claimer at Golden Gate on Mar. 7 (that’s when Meikle and Wind Dancer picked him up), then won an allowance at ASD on May 24. He went on to win the $20,000 Proven Reserve Overnight Stakes on June 2 and then won the $35,000 Golden Boy Stakes on June 21.

Trained by the red-hot Wendy Anderson and ridden by Neville Stephenson, he will be the odds-on favourite in the Derby Trial, depending of course on how many of the invaders that have been nominated actually do show up.

“Having a $100,000 Derby is huge,” Contois said. “This brings the big players back onto our radar. And now that the Canadian dollar is a buck-twenty as opposed to the buck-forty that it was last year, our Derby is now worth taking the trip.”