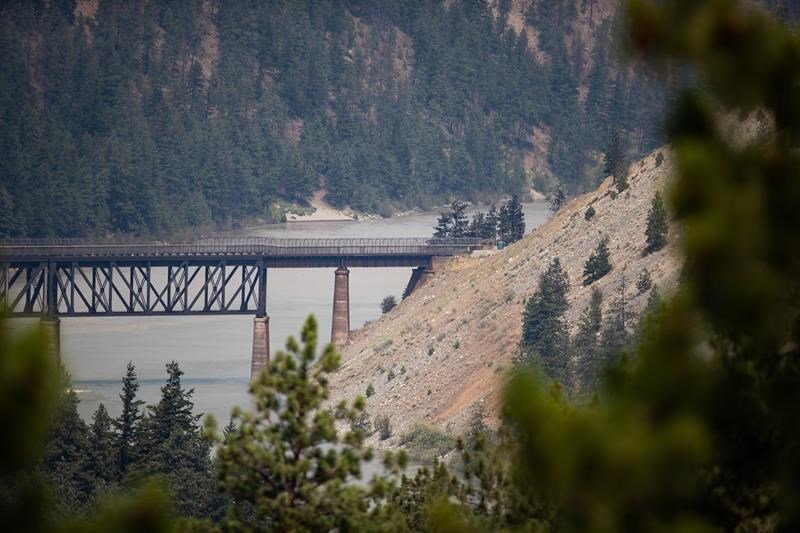 A rail bridge spans the Fraser River as a wildfire burns in Lytton, B.C., on Friday, July 2, 2021. (THE CANADIAN PRESS/Darryl Dyck)

The Canadian National and Canadian Pacific railways must ensure a 60-minute response time to any fires detected along rail lines running through Lytton, B.C., with the goal of extinguishing or controlling the blaze and asking the local fire service for help if necessary, Alghabra said in a release.

“Unprecedented weather conditions in British Columbia continue to pose a serious threat to public safety and railway operations,” the statement reads. “The government of Canada remains committed to supporting those affected by the devastating wildfires in British Columbia and will not hesitate to take any safety actions that are necessary to mitigate these risks to public safety and the integrity of railway tracks and infrastructure.”

The ministerial order comes after the Transportation Safety Board launched an investigation as a result of new information on the suspected source of a devastating wildfire that raced through Lytton on June 30.

The safety board said Friday the information came by way of probes by the RCMP and BC Wildfire Service into the cause of a blaze that destroyed much of the village and killed two people, though no cause has been disclosed.

It is not yet known which rail line is linked to the train in question, and neither Canadian National nor Canadian Pacific has filed any occurrence reports related to the Lytton fire, the board said.

CN has said its trains were not linked to the fire, and CP resumed its service through Lytton on Monday.

More than 200 wildfires are burning in B.C. as a recent heat wave and parched conditions combined to raise the fire risk in many parts of the province to high or extreme.

Lightning also continued to challenge wildfire crews in the province in the past few days.

The new order, in effect until Oct. 31, calls for at least 10 fire detection patrols every 24 hours on stretches of track that run through Lytton. It also makes conductors responsible for spotting and reporting fires on those lines and requires removal of combustible materials following “vegetation control measures.”

CN and CP must also consult with First Nations governing bodies along the two rail lines to work Indigenous knowledge of the region into their fire hazard reduction and fire preparedness plans.

Alghabra had ordered all train traffic through Lytton to halt on Thursday and Friday while residents were on escorted bus tours through the village to take stock of the damage.

Sunday’s order requires slower train speeds when the fire danger level for the area is “extreme” anywhere across the country. No locomotive can pass through one of those areas unless it has been inspected in the past 15 days to ensure its exhaust passages are clear of combustible material.

CN and CP must also implement an “interim extreme weather risk fire mitigation plan” within 14 days and send it on to municipal and Indigenous governments, the order states.