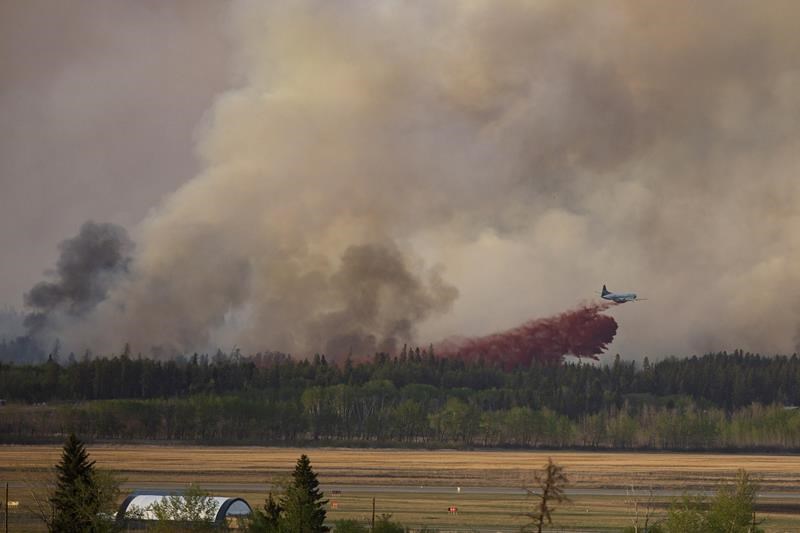 Fire crews drop fire retardant from the air near a forest fire burning northeast of the city in Prince Albert, Sask., Monday, May 17, 2021. (THE CANADIAN PRESS/Kayle Neis)

WINNIPEG — A growing number of wildfires and increasing smoke are forcing the evacuation of another Indigenous community in Manitoba.

The Canadian Red Cross says it is helping individuals with health concerns from Red Sucker Lake First Nation, about 700 kilometres northeast of Winnipeg.

About 300 people were expected to start flying out of the community Thursday and were to be put up in hotels in Winnipeg and Brandon, Man.

The Red Cross said it hoped to have those evacuees out by the end of the night, but added evacuations could continue into the weekend.

It’s the fifth Manitoba First Nation whose members have been forced to leave their homes this week.

Most people from the Little Grand Rapids, Bloodvein and Berens River First Nations have left, while Pauingassi First Nation completed its evacuation on Monday.

There are about 2,000 people displaced and the number is growing.

Manitoba has about 130 active fires. Roughly two dozen are considered out of control.

Weeks of hot, dry weather have prompted fire and travel restrictions that have limited access to remote cottages and put a stop on backcountry camping.

Environment Canada said air quality alerts remained for parts of Manitoba. There were also severe thunderstorm warnings for the western part of the province near the Saskatchewan boundary.