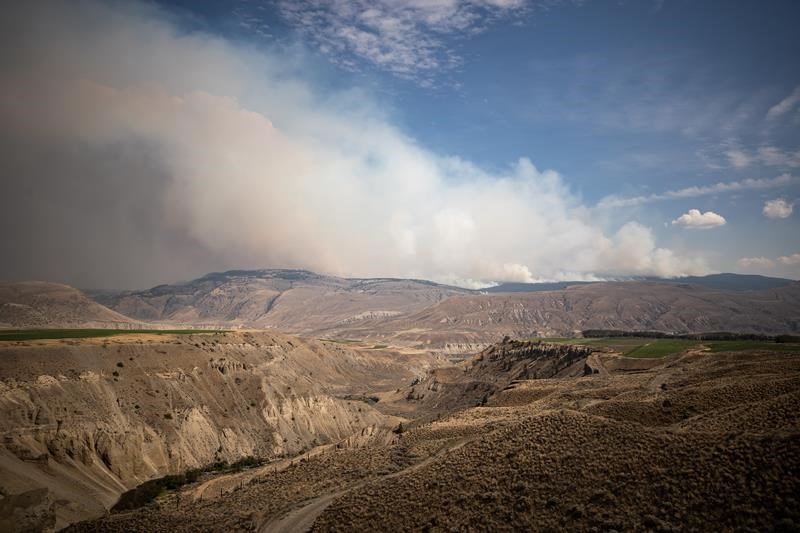 The Tremont Creek wildfire burns on the mountains above Ashcroft, B.C., on Friday, July 16, 2021. (THE CANADIAN PRESS/Darryl Dyck)

One of the authors of a report examining what went wrong during British Columbia’s extraordinary wildfire season in 2017 says this year’s unprecedented heat dome demands new ways of approaching extreme weather events.

George Abbott, co-author of “Addressing the New Normal: 21st Century Disaster Management in British Columbia,” said the current fire season shows more extensive efforts are needed than have been used in the past.

“I just think there’s a new element of complexity in the challenge that was not there even three years ago when we did our report,” Abbott said in an interview.

Heat scorched much of B.C. in late June, setting a Canadian record of 49.6 C in the village of Lytton the day before fire destroyed much of the community. The so-called heat dome and a lack of rain launched the fire season weeks earlier than normal.

Abbott, a former B.C. Liberal cabinet minister, co-chaired the independent review with Skawahlook First Nation Chief Maureen Chapman, who could not be reached for comment.

They made 108 recommendations, ranging from using prescribed burns for prevention to closing the spending gap between wildfire response and mitigation efforts of planning, preparedness and prevention.

As of July 6, the B.C. government says it has implemented 99 of the recommendations, although it did not respond directly to a question about which recommendations remain outstanding.

The BC Wildfire Service was overwhelmed on July 7, 2017, when a massive lightning storm sparked 160 simultaneous wildfires across the Cariboo region. More than 1.2 million hectares were burned that season and about 65,000 people were displaced by fire, while another 2,500 were forced from their homes by flooding from the spring runoff.

“The fires were of a magnitude the BC Wildfire Service simply couldn’t cope with,” Abbott said.

The review found there was untapped potential to partner on the ground with First Nations communities in particular, as well as ranchers, logging contractors, local firefighters and other community resources.

Criticism from local Indigenous leaders about the 2021 response suggests some of the same problems remain.

Chief Matt Pasco of the Nlaka’pamux Nation Tribal Council described the communication from the government during the fast-moving fire in Lytton on June 30 as “abysmal.”

Pasco, who operates a ranch north of Lytton near Ashcroft, said the first contact he received from the government came 12 hours after evacuations began, and it was regarding his cattle, not affected community members.

“They had processes in places for our cattle but none for Nlaka’pamux people,” Pasco said in an interview days after the fire.

Abbott said he believes the government still has work to do improving partnerships, particularly with First Nations, although he noted progress was likely stymied by the COVID-19 pandemic.

The Forests Ministry and BC Wildfire Service say in a joint statement that they are making progress on Abbott and Chapman’s recommendations, as well as those from subsequent reviews, with a focus on preparedness, prevention, mitigation and response.

Among the steps forward, they say the government has invested $129.5 million in the Community Resiliency Investment Program, trained 147 Indigenous firefighters and introduced a Wildfire App to better communicate with the public.

The First Nations Emergency Services Society has been working on an inventory of existing First Nations crews and to identify others interested in establishing crews, while the wildfire service has updated its procurement and contracting processes to identified resources before emergencies happen, the statement says.

Updated predictive services also meant that on Tuesday, the wildfire service was able to provide wind and weather warnings that assisted local authorities in putting evacuation orders in place, it says.

“We recognize that in a changing climate, we need to do more to prevent, prepare for, respond to and recover from emergency events like wildfires and floods,” the statement says.

By Friday, more than 3,600 square kilometres of land had been charred and evacuation orders covered more than 5,000 properties, while another 17,500 were on alert.

Governments are facing overlapping crises this season, with COVID-19 and simultaneous wildfires in other provinces and U.S. states limiting the help that’s available, Abbott said.

However, he said it’s the heat dome that policy-makers should heed.

“That should be hugely alarming to us,” Abbott said.

“If that is going to be a phenomenon that repeats itself in future years, and I have no reason to suspect that it won’t, we are going to be vulnerable not only on the fire side of the equation, but also on the flood side,” he said.

Abbott said he’s concerned that if future heat waves arrive even earlier in the season they will cause catastrophic floods through a fast snowmelt, in addition to prematurely drying the forest.

The new threat means governments should be drawing together the best science and looking at what’s happened in other places like Australia, he said.

“I hope that we will not look at our work in the months ahead as a blame-casting exercise, but rather look at it as our province trying to come to grips with what appears to be a faster paced rate of climate change.”