By Alanna Smith, The Canadian Press 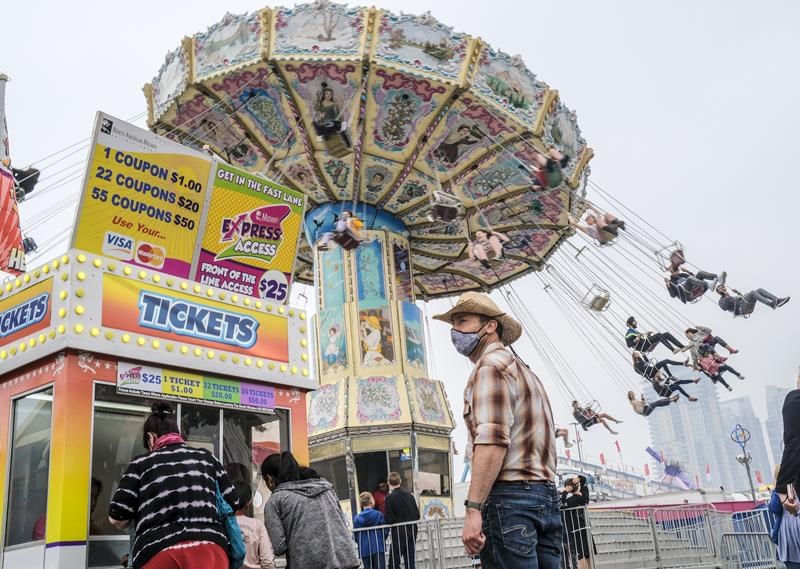 Visitors to the Stampede had to cope an Air Quality Health Index (AQHI) of ten with wildfire smoke blowing into Calgary, Alta., Sunday, July 18, 2021. (THE CANADIAN PRESS/Jeff McIntosh)

CALGARY — Alberta Health says 71 cases of COVID-19 are likely to have been acquired at the Calgary Stampede but community spread as a result of those cases is unknown.

Ministry spokesman Tom McMillan says the 10-day rodeo and festival attended by about 529,000 people isn’t a significant driver, so far, in rising infections in the province.

As of Tuesday, the Calgary Zone represented almost 62 per cent of Alberta’s 1,173 active cases.

Dr. Stephanie Smith, an infectious disease specialist at the University of Alberta, said it’s too early to know the repercussions of Stampede.

“We can anticipate there will be secondary infections from the initial 71,” Smith said Wednesday. “We need to look over the next two to three weeks to see if we see a jump in those secondary cases.”

Dr. Jia Hu, a doctor who advised Stampede organizers on what precautions to take, said infections acquired at the event represent less than 10 per cent of new cases over the last two weeks.

Hu said the low case count speaks to the effectiveness of vaccines and the safety measures that were brought in.

Masks were not compulsory for attendees, but the Nashville North music venue required proof of vaccination or a negative rapid-test result to enter.

Smith said it’s hard to link the current rise in infections to the Stampede alone. Lifting almost all COVID-19 restrictions in Alberta, just before the festival, along with spread of the highly contagious Delta variant first identified in India are key drivers, she said.

The rate was slightly higher in Calgary at 1.5 — one of the highest R-values seen in Alberta throughout the pandemic.

Dr. Craig Jenne, an infectious disease expert at the University of Calgary, said Albertans shouldn’t panic, but he did add that recent case numbers are cause for concern.

“We have the fewest protected people and yet also the fewest public health guidelines to help limit that spread if an outbreak begins,” said Jenne, referring to Alberta’s lower vaccination rate compared with other provinces.

“It doesn’t guarantee that we’re going to see a dramatic rise in cases, but it absolutely creates the potential for rapid and sustained viral spread.”