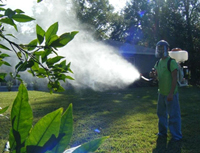 There’s one upside to these unseasonal temperatures — mosquito levels are being kept to a minimum.

The City of Winnipeg said Friday that so far the battle against the annoying creatures who call Manitoba home each year is being won.

Beginning next week, the city will tackle a whole other annoyance — cankerworms. Monitoring of egg masses and adult cankerworm populations shows the potential for a significant cankerworm emergence in certain areas within Winnipeg over the next few weeks.

Cankerworms are expected to be at levels similar to those that occurred in 2007.

Individuals opposed to the use of insecticides near their property in the fight against either mosquitoes or cankerworms can request a buffer zone by going to Winnipeg.ca/bugline or contacting 311.