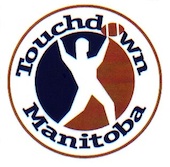 Tickets for the Touchdown Manitoba Grey Cup social on Friday, November 26 in Edmonton are selling quickly.

Touchdown Manitoba is now in its 18th year as one of the can’t-miss parties at the Grey Cup Festival. Party-goers will be treated to a non-stop entertainment lineup headlined by party band Cherry Suede and also featuring performances by the Labatt Blue Lightning Dance Team, the Winnipeg Police Pipe Band and the host city’s Edmonton Eskimo Cheer Team.

Tickets to the event at the Shaw Conference Centre include a snack buffet with kolbasa, rye bread, and all of the traditional delicacies of an authentic Manitoba social. Those in attendance will also have the chance to win great CFL prizes.

A limited number of tickets will be available at the door for $15 (cash only).