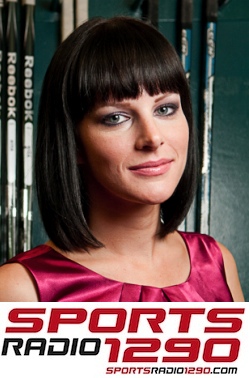 CTV Winnipeg sports anchor Leah Hextall is getting behind the mic to host a new talk radio show on Sports Radio 1290.

Hextall will be host of “Amateur Hour” on the CTV-owned station beginning Monday, January 31.

And before you jump to conclusions about the title of the show being about Leah’s attempt at radio, it’s actually about Manitoba’s great amateur athletes. The show will highlight the best of high school, CIS, WHL and MJHL athletics, along with other amateur leagues.

“Playing sports in the amateur ranks is where I spent the better part of my youth and it’s over looked in this province,” Hextall said in an e-mail.

The show will air each Monday from 7-8 p.m. and also include a pro athlete guest.

“Bottom line: they’re letting me loose and I plan on having a ton of fun with the show,” Hextall added.

Promos for “Amateur Hour” will begin airing this week.