Fans shutout from purchasing Winnipeg Jets season tickets in June still have a chance at seeing the team at MTS Centre this season.

Jim Ludlow, president and CEO of True North Sports and Entertainment, addressed the media Friday afternoon and laid out the details of individual ticket pricing, the online draw, and the Winnipeg Jets ticket exchange portal. 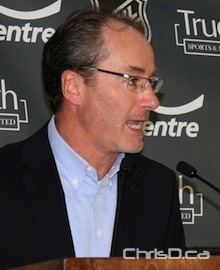 “A” games include opponents such as the Montreal Canadiens, Pittsburgh Penguins, Washington Capitals and Toronto Maple Leafs. “B” games include the Philadelphia Flyers, Boston Bruins and the Phoenix Coyotes. “C” games include the Florida Panthers, Buffalo Sabres, and the New York Islanders. However, some teams’ visiting dates are in more than one category, including the Tampa Bay Lightning (A and B) and the Carolina Hurricanes (B and C).

A public ticket draw program has been created at WinnipegJets.com/tickets, where fans can use an online ballot entry (one per person) for a chance at claiming their seats.

Each month, fans will be randomly contacted with a unique password to enter on the Ticketmaster website where they can select their tickets (up to two). Names chosen will not be re-entered into the draw again. Fans only need to enter the draw once and names that aren’t pulled will be automatically put back to be eligible for the following month’s draw.

The Jets also announced a ticket exchange program through Ticketmaster, where fans can buy or sell tickets as sanctioned by the club at WinnipegJets.com/ticketexchange.

Jets tickets are the hottest commodity in town. They were so popular after going on sale, True North soon established a waiting list, which quickly filled up to its 8,000 maximum name limit.

The first pre-season game is September 20 against the Columbus Blue Jackets at MTS Centre.