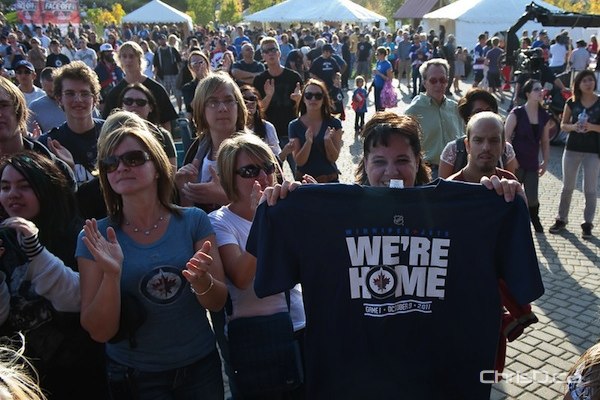 Fans welcome back the Winnipeg Jets and celebrate the start of the NHL season at The Forks on Thursday, October 6, 2011. (TED GRANT / CHRISD.CA)

Thousands of Winnipeggers flocked to The Forks Thursday to celebrate the start of the 2011-12 NHL season and the return of the Winnipeg Jets. And why not? This city loves a party. But if you thought yesterday’s six-hour festival was a sight, just wait until Sunday when the puck drops at MTS Centre.

There was a certain type of energy in the air at the 2011 Molson Canadian NHL Face-Off party, as hockey fans young and old came together to take in entertainment by Bachman & Turner, Three Days Grace and Winnipeg-based Inward Eye. Large TV screens showed CBC’s “Hockey Night in Canada” broadcast, while other visitors made the rounds to try their hand at shooting a hockey puck the hardest, played a game of shinny on artificial ice, and browsed the latest in official Jets gear in the merchandise tent.

People began showing up by mid-morning to stake out their spot on the lawn in front of the Scotiabank stage. Some even skipped out on work to set up their lawn chairs.

“This is a once in a lifetime event, you know? Of course I’m going to be here,” said one man, who kindly declined to be named at the risk of getting in trouble with his boss.

“People of Winnipeg have been hospitable and have welcomed us back. I think after a 15-year hiatus you just see how really insatiable the appetite is for hockey,” said Brian Jennings, the NHL’s executive VP of marketing. “We’re really excited to bring it back here.”

Jennings also said the market is playing a huge role in the league’s success to return to the city. Jets merchandise has been out-selling other teams all across the country since it was introduced in July.

Winnipeg police estimated about 100,000 people made their way to The Forks at some point in the day. By Thursday night, there were no reports of any major incidents, but officers were on the lookout for open liquor outside of designated areas.

The Forks will see a repeat of Thursday on Sunday for “The Family FanZone,” where more hockey-related festivities are planned from 12 p.m. to 8 p.m. At 4 p.m., CBC will air the Winnipeg Jets’ season opener against the Montreal Canadiens on three giant screens.

View the photo gallery below from the 2011 Molson Canadian NHL Face-Off party.