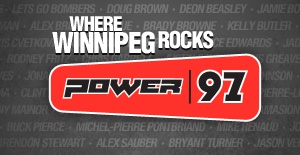 Winnipeg radio station Power 97 is sticking it to Vancouver this weekend, vowing not to play any musical artist currently operating out of the British Columbia city.

The B.C. Free Weekend leads up to Sunday’s Grey Cup game between the Winnipeg Blue Bombers and the BC Lions.

In a news release Friday, the rock station said they won’t be playing anything from Matthew Good, 54-40, Theory of a Deadman, Default, Moist, Odds, Trooper, Loverboy, Art of Dying, Limblifter, Chilliwack, My Darkest Days, and Thornley.

Also not appearing on the playlist? Nickelback — even though they hail from Alberta.

“CFL teams who need to use their province in their name are an embarrassment,” the station said. “Yeah, we’re looking at you Saskatchewan. Way to not even make the playoffs.” Ouch!