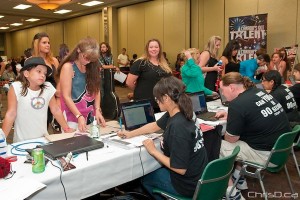 Contestants register at the "Canada's Got Talent" auditions at the Winnipeg Convention Centre on Saturday, September 10, 2011. (TED GRANT / CHRISD.CA FILE)

The most talented Winnipeg performers from the first round of “Canada’s Got Talent” auditions will perform for a live audience two days later this month.

Performers will be judged by a panel of celebrities, including Martin Short, Measha Brueggergosman, and Stephan Moccio. The live theatre auditions will be hosted by Dina Pugliese.

Winnipeg is the fourth stop on the nationwide tour that also visits Calgary, Vancouver, Toronto, Halifax and Montreal.

The approximately three-hour live auditions will be taped at 1:30 p.m. and 7 p.m. Tickets are free and available on a first come, first served basis by e-mailing [email protected]. Approximately 20 minutes before each taping, any unclaimed tickets will be distributed to people in a rush line, subject to seating availability.