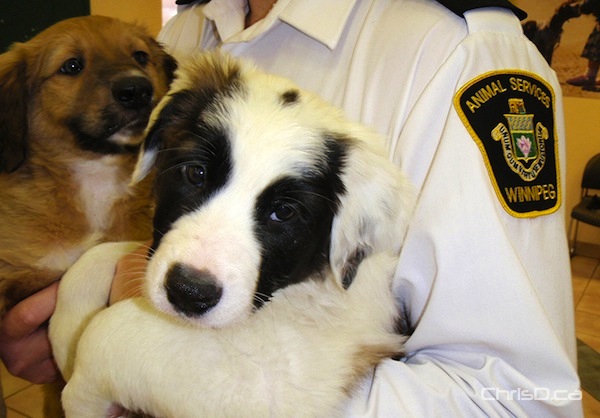 Newly-named puppies Noah and Eva are available for adoption from the city after being found abandoned on Christmas Eve. (CITY OF WINNIPEG)

Four puppies were brought to the city’s Animal Services Agency Christmas Eve after being found abandoned in a box.

The city says Noah and Eva — two of the four pups shown above — were found near the corner of Ellice Avenue and Wall Street. The dogs are now available for adoption to a loving home.

Animal Services is reminding the public there are many resources available if an owner can no longer care for their animal, such as asking a family member or a friend, or seeking the help of the numerous animal welfare groups in Winnipeg.

The Animal Services Agency at 1057 Logan Avenue will be open Saturday, December 31 and Monday, January 2 from 12 p.m. to 5 p.m. Adoptions won’t be available on New Year’s Day, January 1.