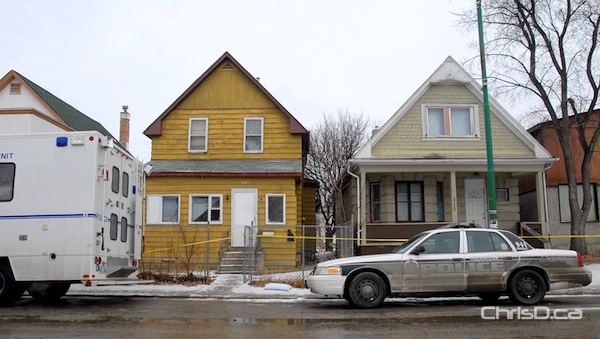 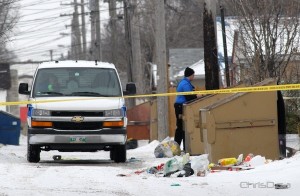 Winnipeg police cadets tape off an area in the back lane of a home on Selkirk Avenue where a man was shot on Saturday. (STAN MILOSEVIC / MANITOBAPHOTOS.COM)

Winnipeg has recorded its 39th homicide of the year, with less than a day to go in 2011.

Police responded to a home in the 600 block of Selkirk Avenue at about 5 a.m. on Saturday after reports of a shooting. Once there, an adult man was located with injuries and transported to hospital in critical condition. A 30-year-old woman was also taken to hospital after being shot, and is listed in stable condition. The man later succumbed to his injuries.

Police say a number of people were at the residence at the time of the shooting.

It’s a record year for homicides in the city, surpassing the previous record of 34 reached in 2004.

Winnipeg police are continuing to investigate and haven’t yet made any arrests. A number of people are being interviewed by investigators.

The man’s name and age haven’t been released.

UPDATE: January 1, 2012 — The victim has been identified at Michael Warren Sinclair, 46, of Winnipeg.