Blazing Jets Close Out 2011 in Style 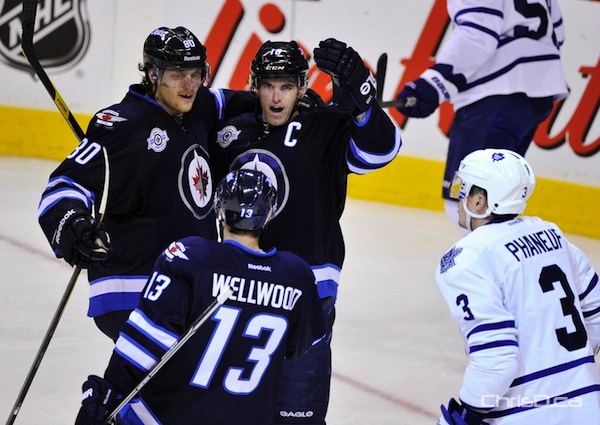 WINNIPEG — Winnipeg hockey fans will ring in the New Year with a victory, as the Jets handed the Toronto Maple Leafs a 3-2 defeat in front of the perpetually sold out and raucous MTS Centre on a celebratory Saturday night.

“A new year. People went crazy tonight,” said Winnipeg netminder Ondrej Pavelec after securing his 14th win of the season. Pavelec closed out December with a pair of shutouts, four one-goal performances, and a 6-3-1 personal record while sustaining a beyond impressive .940 save percentage.

The 24-year-old backstop was key for the Jets in a month that will go down as the most successful in franchise history, with the team going 10-3-1.

December saw Winnipeg (19-14-5) play 12 of 14 games on home ice, moving from near the Eastern Conference cellar into a tie for sixth with New Jersey and Ottawa. A mere four points now separate them from the Southeast Division leading Florida Panthers.

“The team is a lot different from November 29th when we started this home stretch,” said bench boss Claude Noel. “More in our team play. We’ve gone through a couple of different levels of team building in our dressing room. I think players have settled in… and accepted their situation and roles. I think they’ve played with way more purpose — team purpose.”

“We made a lot of moves in the right direction,” said defenceman Zach Bogosian of the month. “We’ve got to keep climbing. We can’t be satisfied… and can’t get complacent because we made some headlines.”

“I think we made hay,” added Noel. “I thought we played well through the month, and we have to carry that through.”

Noel speaks with foresight with his team hitting the road for six of their next eight, and only four January home dates.

“I don’t see things changing on the road. Maybe there’s a little difference in battle level. I think we’re in a good place. For us, we’ve got nothing but good things.”

The Jets travel to Montreal, Toronto, Buffalo, and Boston over the next 10 days before returning home to face the Sharks and Devils on January 12 and 14.