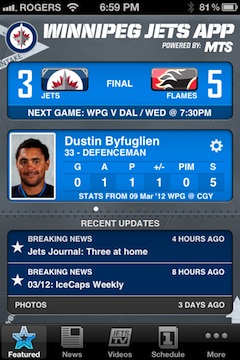 A screen shot from the Winnipeg Jets smartphone app. (CHRISD.CA)

Winnipeg Jets fans will have another way to keep tabs on their favourite NHL team now that an official smartphone app has hit the market.

The Winnipeg Jets App was pushed through to Apple’s App Store on Tuesday and is available for iPhone, iPad, BlackBerry and Android devices.

The MTS-powered app will be officially unveiled during a news conference slated for Wednesday, but that hasn’t stopped some eager fans from downloading it early.

Content includes game scores and statistics, news, photos, videos, the team’s season schedule, the ability to purchase game tickets, player bios and even a Fan Noise function to measure the decibels of the noise around you during games.

The app is free for download by searching “Winnipeg Jets” in your device’s app store and works with all carriers.