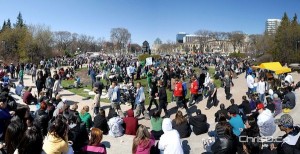 Thousands of people converge on the grounds of the Manitoba legislature to push for the legalization of marijuana on Friday, April 20, 2012. (STAN MILOSEVIC / MANITOBAPHOTOS.COM)

For a second day in a row, a cloud of smoke filled the air of Winnipeg’s downtown, but this time it wasn’t from a massive fire.

Pro-marijuana activists held their annual 4/20 demonstration on the grounds of the Manitoba legislature. About 2,000 people were estimated to have been there, as smokers called on the government to legalize the drug. 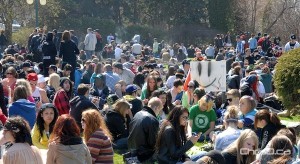 People smoke-up during the annual 4/20 celebrations at the Manitoba legislature on Friday. (STAN MILOSEVIC / MANITOBAPHOTOS.COM)

Police and provincial security kept watch, but did not make any arrests due to the numerous infractions playing out right in front of them. Their role was simply to keep the peace.

“We are obviously using professional discretion in these cases, and monitoring the situation as we go forward,” Winnipeg Police Const. Natalie Aitken said. “If we do encounter situations that we do believe requires us to act, that’s something that we will do. Any acts of violence or property damage — anything concerning safety of those at this location is something that would be dealt with appropriately.”

Meanwhile, hot dog carts and other food vendors setup early Friday morning to prepare for what was a busy and lucrative day for them. The line late afternoon at many of the vendors was several dozen people deep.

The demonstration coincided with a city-wide school in-service, so revellers estimate there were more people present this year than usual.