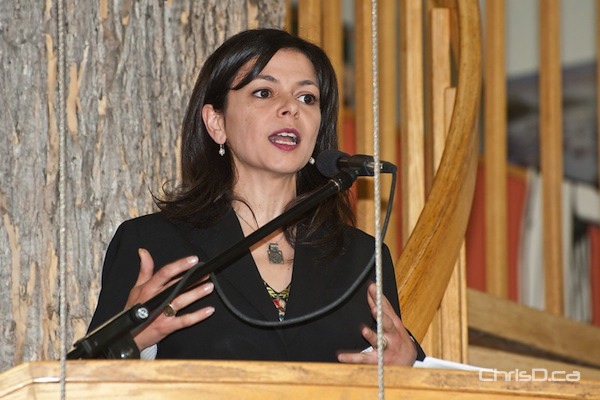 The former Winnipegger-turned-globetrotter launched her new book, “A Thousand Farewells,” and spoke to the crowd about her ongoing journey to share the stories of those she meets as a foreign correspondent — often stationed in the world’s most volatile and unsettled regions.

In the book, Ayed describes with sympathy and insight the myriad ways in which the Arab people have fought against oppression and loss as seen from her own early days witnessing protests in Amman, and the wars, crackdowns, and uprisings she has reported on in countries across the region.

Ayed, although born in Winnipeg, moved to a refugee camp in Amman, Jordan with her family in 1976. Seven years later, they were back in Winnipeg.

“People are not quotes or clips, used to illustrate stories about war and conflict. People are the story, always,” Ayed writes, as stated in an excerpt from the book.

Ayed told the crowd she always feels welcome in her hometown and was overwhelmed at the huge outpouring of support.

Not surprisingly, McNally Robinson quickly sold out of “A Thousand Farewells.”