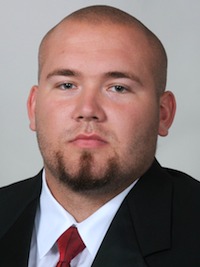 Tyson Pencer, the third overall pick from this year’s CFL Draft, has been signed to the Winnipeg Blue Bombers.

“We are very happy to have Tyson locked up and are looking forward to seeing him on the field this afternoon,” said vice-president and general manager Joe Mack. “Tyson is a gifted athlete who we are counting on to be a big piece of the puzzle for many years.”

Pencer, an offensive lineman, spent two years with the Washington State Cougars and made a number of starts at tackle before leaving for the Okanagan Sun in 2011. He was one of 14 Cougar freshmen to start a game in 2009, appearing in seven contests that season while starting four at left tackle.

The North Delta, B.C. native will be on the field for rookie camp this afternoon at Canad Inns Stadium.