Jets Come From Behind to Stymie Crosby and the Pens 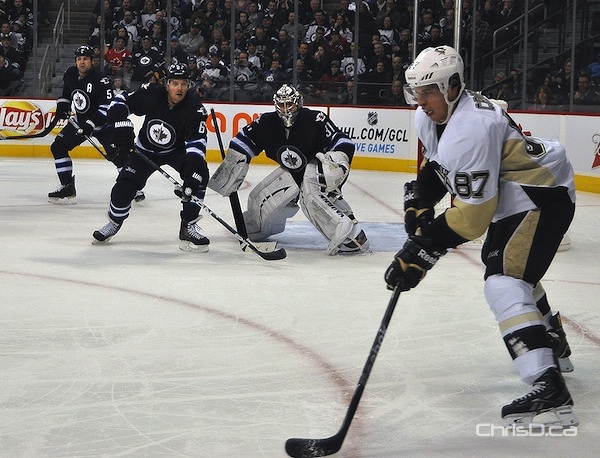 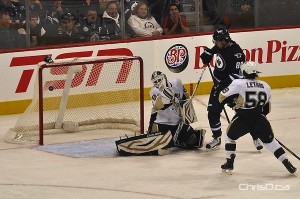 WINNIPEG — It started as the Crosby Show on Friday night, as Sid the Kid and the Pittsburgh Penguins came into town looking to give the Winnipeg Jets their first serious test of the young season — and the home team passed with flying colours, erasing a two-goal deficit with four unanswered to win 4-2 in front of what could be described as the loudest MTS Centre crowd since December of last season.

“The biggest thing was there was no panic,” said Winnipeg forward Blake Wheeler who iced the game in the waning moments with an empty-netter. “There was no yelling on our bench. No four-letter words thrown around. It was very calm.”

A truer test of their mettle would be hard to discover as the best player in the world made his impact almost immediately. 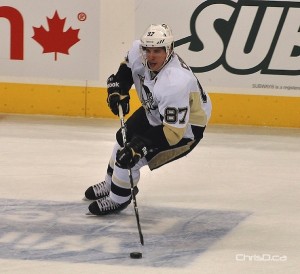 Sidney Crosby, amid raucous chants and boos from the Jets faithful, exploded for a pair of first period goals. The first, eerily similar to ‘The Golden Goal’ that clinched the 2010 Olympic Gold Medal for Canada, while the second fired off his backhand through Ondrej Pavelec’s legs to cap a quick Penguins rush.

“This is a fairly daunting task when you’re down 2-0 after 20 and not sure how it’s going to turn out,” said Jets head coach Claude Noel. “I think we just focused on the task. Our goal was really to win the second period and just go from there.”

“When (you’re at) home and you start getting the crowd behind you, I think they become an extra player for you.”

No worse for wear, the Jets cut the deficit in half just over a minute into the second. On the rush, Dustin Byfuglien laid a drop pass to Wheeler who found Evander Kane across the slot. Kane made no mistake, burying second of the season into the gaping cage behind Penguins goaltender Tomas Vokoun.

Byfuglien added a blast from the point on the power play to tie things up before Andrew Ladd potted the go-ahead and eventual game-winner late in the middle frame.

Kane, Wheeler, Ladd, and Byfuglien all finished the game with a goal and an assist.

Sparking Winnipeg’s scoring outburst may have been their goaltending, swinging momentum heavily and getting the crowd back in it trailing 2-1, as Ondrej Pavelec used his right pad brilliantly to twice rob the league’s leading scorer from last season, Evgeni Malkin.

But the Jets’ netminder feels having to face only 70 seconds of the Penguins with a man advantage was the critical piece to building Friday’s win.

“Crosby or Malkin — if you put those guys on the power play it’s going to be a long night for you,” said Pavelec. “I think we did a great job to stay disciplined.”

“We would like to keep some things in a balance,” added Noel. “We won’t separating our shoulders patting ourselves on the back… but this was a huge step for us.”

The Jets, now 2-1-1 on the season, host the New York Islanders on Sunday night.