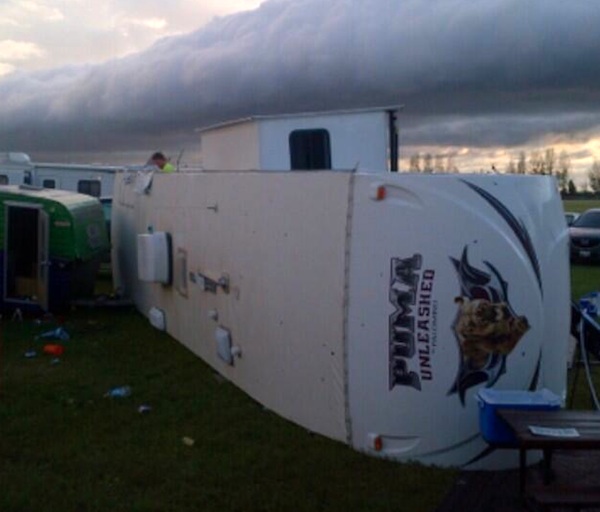 An overturned trailer in the RM of Pipestone on Saturday, July 13, 2013 after a tornado likely touched down. (DANNY JOHNSTON / TWITTER)

What is likely to be confirmed as a tornado ravaged parts of southwestern Manitoba Saturday night, leaving a path of destruction behind.

Residents in the RM of Pipestone — who were dealing with flooding just a few short weeks ago — reported severe damage that destroyed the small town’s community hall and overturned a mobile home.

Environment Canada hasn’t confirmed whether or tornado touched down shortly after 7 p.m., but meteorologists said based on photos from the scene, it appears a tornado was responsible.

Nearby in Hartney, Manitoba — another flood-prone community — winds uprooted trees and tossed around pieces of sheet metal on a farm.

No injuries were reported in either location, but accompanying hail was also part of the mix that caught many off-guard.