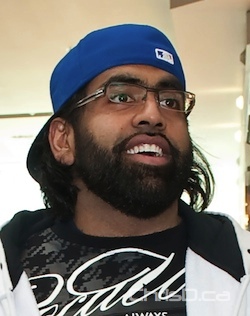 Khan will be joined by University of Winnipeg Wesmen coach Bob Axworthy at Yoga Public, 280 Fort Street, to raise funds for the deserving young team.

The 3 p.m. appearance adds to Yoga Public’s proceeds to the team throughout the month of August from their Karma Yoga classes.

Axworthy and Khan have also agreed to start a youth employment opportunity, by hiring some members of the basketball team at his popular restaurant, Shawarma Khan.

“I like giving back to a city that’s been so great to me, and this is a perfect opportunity to give some inner city girls a better chance at success”, Khan said in a release.